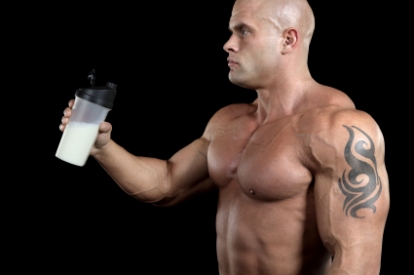 Reports in The Times of India newspaper suggest that modern dietary intakes could play a major part in the rise of hair loss in men in their twenties and thirties. Based around a study by Australian transplant surgeon named Jennifer Martinick, The Times claims that protein shakes may be a contributing factor when it comes to hair loss.

Martinick believes that a preoccupation with looks is causing many men to risk the health of their hair through the intake of various dietary supplements. The report singles out protein shakes used as part of an exercise regime as being one potential cause of hairloss.

It’s not the Protein

Although Dr Martinick suggests that protein shakes may be damaging to a man’s hair, she points out that not all dietary supplements are unhealthy or problematic. According to the Australian’s report, certain shakes contain a number of additives which have the potential to affect the hormone balance of the person using them.

Protein shake additives such as inorganic growth hormones and creatine are intended to promote the growth of muscle mass, but in doing so they can also raise testosterone levels within the blood stream. Initially these growth hormone additives are not necessarily harmful, but in men who are genetically predisposed to balding, the loss can be accelerated.

Elevated testosterone levels are of particular concern to men with a family history of hair loss because the hormone can exacerbate the thinning of their own hairline. Testosterone can be problematic for certain people because of the way their bodies handle the hormone.

For men with Androgenic Alopecia, or male pattern balding, testosterone is broken down by an enzyme called 5-alpha reductase. The resulting chemical is called Dihydrotestosterone (DHT for short) which then inhibits the growth of new hair cells in the scalp. As time goes on, the lack of growth means that the man in question loses hair through normal shedding processes but which cannot then be replaced.

The protein shakes mentioned by Dr Martinick become a problem for men susceptible to Androgenic Alopecia because they promote the production of increased levels of testosterone. The more testosterone present in a balding man’s blood, the more hormone is converted into the androgen DHT, which in turn affects more hair follicles than normal. Protein shakes do not themselves cause a receding hairline, but they can certainly accelerate the process for certain men.

As identified by Dr Martinick, the first step for men experiencing hair loss as a result of their fitness regime is to cut out protein shakes containing growth hormones, such as creatine and DHEA, and switch to an organic alternative. For men with Androgenic Alopecia, a switch of protein shake brands will only slow hair loss, so further professional advice should be sought.

Researchers have also found that physical exercise regime has a part to play in hair loss, regardless of the dietary supplements used. Men undertaking short, intense workouts using heavy weights with a view to increasing muscle bulk will also elevate their testosterone levels. As with growth hormone-induced testosterone levels, increased hair loss is again the logical outcome.

For men wishing to remain fit and hairy, the solution is to move away from intense workouts towards more aerobic-based exercise. Not only do aerobic exercises maintain a good level of fitness, but they also help reduce the level of androgens borne in the bloodstream helping protect hair follicles from attack. 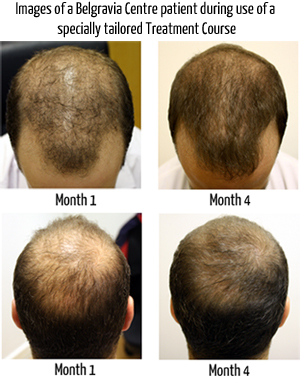 Unfortunately a change of exercise regime and dietary intake is not always enough to restore a receding hairline and professional assistance then becomes imperative. A visit to a hair loss expert, like The Belgravia Centre, will not only help to accurately identify which form of hair loss is at work, but also a course of action to halt further shedding.

Several effective treatments are available which help to promote hair regrowth with a high success rate. Following an initial consultation, our hair loss experts will formulate a hair loss treatment plan tailored to the specific needs of the client to ensure that they receive not only the very highest standards of care, but the correct combination of medication and complementary therapies for maximum hair regrowth.

For customers outside the UK, The Belgravia Centre offers an online diagnostic form. Simply complete the requested details and we will create an individualized treatment plan that we can mail worldwide.

When coupled with our personalised treatment plans, our clients report a high degree of success and satisfaction with our service, all of which has helped The Belgravia Centre become the UK’s leading hair loss clinic. To find out what they have to say, why not check out our hair loss uccess stories - it's the largest collection of its kind in the world and includes 'before/during treatment' photos and comments from hundreds of men and women using Belgravia's treatment programmes for hair loss.


Foods that can Lead to Hair Loss