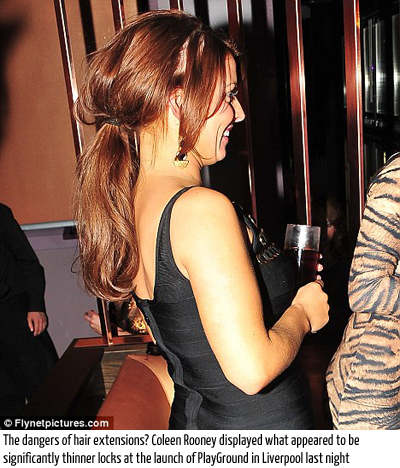 No sooner has her husband Wayne hit the headlines again with further revelations regarding his battle against a receding hairline, than Colleen Rooney is also pictured in the tabloids showing clear signs of thinning hair. Photographs taken of the WAG on Saturday night outside the newly opened PlayGround nightclub in Liverpool reveal patchy hair loss around the sides of her head.

Back in February of this year, Colleen was observed to have developed a patch of thin hair, but the most recent photographs suggest that rather than getting better, her hair has continued to fall out. Hair loss is nothing new in the Rooney household, but Colleen has always been more circumspect in talking about her hair care regime. This has lead to plenty of speculation as to the potential causes of her thinning locks.

Colleen’s penchant for hair extensions is well documented, using them to boost the volume and appearance of her own hair. Although very effective for improving the look of a woman’s hair, extensions also carry a risk to her own natural tresses.

Extensions are firmly attached to the base of natural hair strands, as close as possible to the scalp. The attachment process coupled with the additional weight on the hair can eventually cause damage to the hair and follicle, leading to the hair falling out. If stress continues to be placed on the hair follicle it eventually becomes so damaged that new hair fails to grow at all. 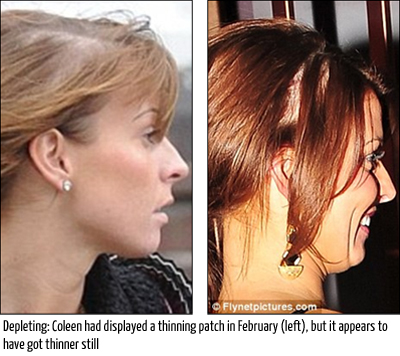 Known as Traction Alopecia, hair extension-related hair loss is becoming increasingly common amongst celebrities. Katie Price, Kat Von D, Serena Williams and a number of other a-listers, have all experienced hair loss as a result of using hair extensions this year, and it seems as though Colleen Rooney is the latest paying the price of choosing fashion over good hair care.

Stylists and hair loss experts agree that hair extensions and weaves are not in themselves bad, but choosing to wear them all day every day for months on end is. Not only do extensions place hair follicles under pressure, but they also tend to require additional maintenance which can further damage a woman’s natural hair.

Chemical treatments, hair straighteners and dyes all have the potential to weaken hair. Factor in the weight of an extension and it is only a matter of time before a woman begins to find that her hair is breaking and thinning.

The obvious course of action for a woman in this position is to arrange for another weave to cover the thinning patches, deflecting attention from patchy hair loss. However in doing so, the hairloss is accelerated and magnified with ever larger patches of hair being affected.

FPB and the WAG

Of course it is possible that Colleen Rooney is actually experiencing a similar form of her loss to that of her husband Wayne, called Female Pattern Hair Loss. Known by hair loss experts and doctors as Androgenic Alopecia, pattern hair loss affects both men and women and is caused by a hormonal change which prevents the growth of new hair cells.

Androgenic Alopecia is a genetic condition which causes the hormone testosterone to be converted into a secondary compound called Dihydrotestosterone (DHT). DHT attaches itself to hair follicles and prevents essential nutrients being delivered to the hair strand. The attached hair then falls out and the follicles shrinks, until hair no longer grows from it.

If Colleen Rooney’s hair loss has indeed been caused by an over use of hair extensions, the first step to remedying the situation is to remove the extensions and seek advice from a professional hair loss specialist. It is essential that anyone experiencing hair loss brought about by extensions removes them immediately to prevent further, potentially irreparable, damage to the hair follicles.

After examination, a hair loss expert may prescribe a course of medications or an alternative therapy to encourage hair regrowth. Treatment will vary from person to person depending on their specific circumstances and the extent of the hair loss.

If however Colleen has lost her hair as a result of Androgenic Alopecia she would also need to seek professional advice about encouraging regrowth. She could expect to be prescribed a treatment course consisting of medically proven treatments and specially tailored hair growth boosters to help increase blood flow to the scalp and reduce DHT being delivered to the follicles, which in turn delivers much needed nutrients to her hair follicles without damaging the hair follicles further.

Whatever the cause of the hair loss seen this weekend, there are several proven techniques available to Colleen which have a high degree of success in not only halting hair loss, but encouraging healthy regrowth. She could read a number of success stories about treatments provided by The Belgravia Centre  if she needed any further encouragement. Then she could contact us for a free consultation.