The popular broadcast journalist, who was diagnosed late last year, has been keen to demystify the treatment process from day one, and decided not only to blog about her cancer journey but to show her chemotherapy treatment on Facebook Live so that people could see exactly what it entailed.

Keep cancer drugs away from follicles

The hour-long video of her her chemotherapy session, which has been viewed more than 50,000 times, shows Rachael wearing a cold cap a device which can keep cancer drugs away from the hair follicles by chilling the scalp during chemotherapy. In doing so, the chances of the cancer drugs making hair fall out is often greatly reduced.

Rachael's use of the cold cap certainly seems to have been a success, as one of her most recent Twitter postings thanks @scalpcooling and shows her with a luxurious head of hair, three months after finishing chemo. Continues below... 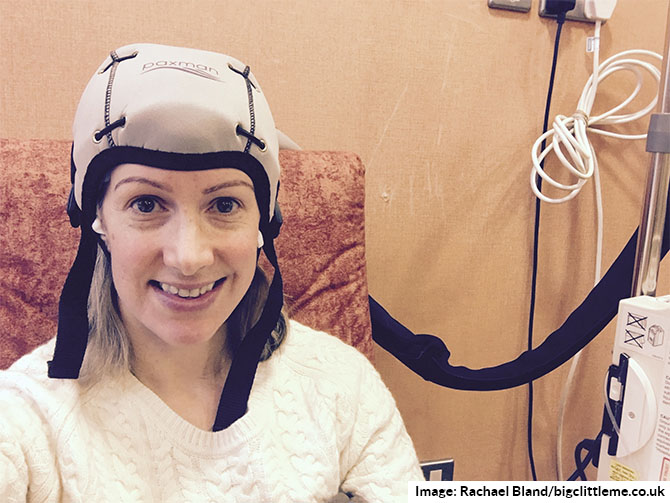 She wrote specifically about using a scalp cooling system on her cancer blog Big C, Little Me. One of her top tips for using a cold cap is to ensure the fit works for you.

"There needs to be good contact between the cap and your scalp for it to work," she wrote.  It’s never going to be perfect as they are not custom fitted but there are ways of improving the fit.  The most important place for the cap to sit flat is on the top of your head and across the crown.  If your hair thins here it will be noticeable.  If it’s at the sides or underneath at the back (which is where mine has thinned) you can easily hide it with the rest of your hair. "

The @scalpcooling name Rachael referred to on Twitter is that of UK firm Paxman, whose cold caps are widely used in British hospitals and have helped a reported 100,000 people in more than 25 countries avoid or minimise hairloss during treatment for a variety of cancers.

The prospect of losing hair to chemotherapy drugs is a hugely worrisome part of cancer treatment for many people, as they perceive it to be a very visible sign that they are ill. It frequently leads to looks and questions from friends and strangers alike, and can seriously dent a person’s sense of identity.

The good news is that hair that is lost during treatment usually grows back, and a patient can normally expect a full head of hair again in a year or less though they are sometimes forewarned by doctors that it might grow back slightly different to how it was before. “Chemo curls”, where once-straight hair grows back very curly post-treatment, are common, but normal service does eventually resume following a couple of hair growth cycles in most cases.

Rachael’s video which can still be seen online is likely to be reassuring to anyone who is about to undergo chemotherapy and is thinking of using a scalp cooling system. It shows the 38-year-old first dampening her hair, and then she is assisted by a nurse in putting the cap on. Rachael also dispels worries that cold caps are unpleasant to wear, stating that “I read that some people said it’s really cold for the first 15 minutes or so and it’s really uncomfortable, but I find it alright.”

In fact, the placing of the cap takes just a couple of minutes, Rachael joking that it looks a bit like a “rugby player’s scrum cap” once it's on.

What is Anagen Effluvium Hair Loss?

What is Anagen Effluvium Hair Loss?