Extensive testing is required before the MHRA license medical drugs for use by patients, and as such, the licensing body can predict what side effects people are likely to suffer from and ensure nothing dangerous is available. However, we don't have this information for illegal drugs, and whilst scientists are looking in to what effect these drugs can have, who knows what implications they could have for peoples' health in the years to come.

Giving up drugs can be extremely hard, and so can coping with the side effects that the drugs cause down the line.  A Class A drug, cocaine is alarmingly popular as a 'party drug,' and despite being potentially lethal and incredibly addictive, it is used socially by many. 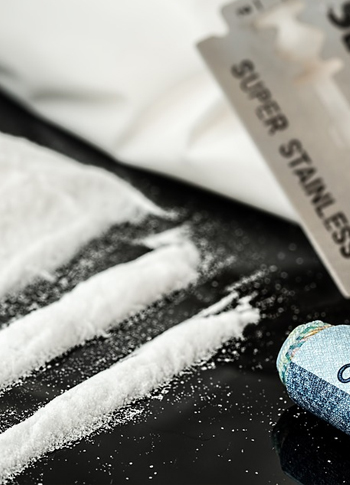 There are several ways in which cocaine can be a cause of hair loss. Firstly, cocaine can cause shock due to how the body reacts to such a powerful drug appearing in its system. This shock can lead to telogen effluvium, a hair loss condition where certain hair follicles prematurely stop growing and enter the resting phase. After three months these hairs will shed, causing more hair loss than usual. The hair should grow back within a couple of months, but if drug use is ongoing, the hair loss may well follow suite.

Taking cocaine can also cause another hair loss condition: diffuse thinning. Diffuse thinning involves an increased rate of hair fall from all over the scalp (rather than in patches) and means the patient's entire head of hair will gradually thin. This can occur due to poor diet, and as cocaine suppresses the appetite, those who use it are less likely to eat a balanced diet full of  protein and all the vitamins and minerals needed for healthy hair.

Whilst no major study has yet to be done into the long term effects of drug use on humans, a study did inject cocaine under the skin of rats. It was discovered that hair loss occurred around the injection area within two days. The study established that cocaine is toxic to proliferating cells, and as hair follicle cells are the most active of any in the body, dividing once every 13 hours, a cessation in this cell activity could result in hair loss.

The Long And Short Of It

Of course, there are a lot of other issues linked to cocaine use that can negatively effect your hair: getting less sleep, feeling generally unwell from the effects of the drug, and withdrawal symptoms can all cause hair to weaken. The obvious first step is to stop the drug use, but if several months go by and you're still noticing hair loss, it might be that your recent shedding has been masking the onset of pattern hair loss, something that won't be stopped by ceasing to use the drug and which needs medical treatment to halt the rate of loss. The Belgravia Centre offers treatment programs that can stop excess shedding of hair and often regrow thinning hair, using a combination of clinically approved medications and other hair growth boosters to give you the best chance of achieving a healthy head of hair.