The existence of a protein that causes cells to die is being investigated by scientists in North Carolina in the hope it might provide clues to a particular type of hair loss.

Scarring Alopecia, also known as Cicatricial Alopecia, describes a number of conditions where hair loss is caused by inflammation of the scalp, which in turn damages follicles.

Now, a medical team at Wake Forest University in North Carolina are trying to find out if something called Fas proteins a death receptor on the surface of cells is present in the scar tissue of people with Scarring Alopecia. By collecting biopsy samples from people with a various types of Scarring Alopecia (chiefly a condition known as Central Centrifugal Scarring Alopecia) and then analysing them, they will be able to detect, as they put it, “the expression of Fas protein in participants.” 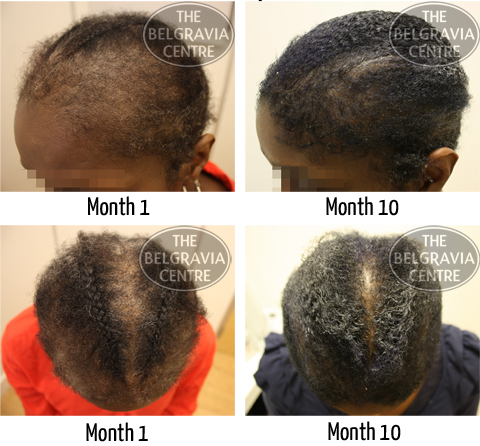 "...It's Like a Miracle!" - This Client Came to Belgravia Experiencing Severe Traction Alopecia and FDS - Click to View Her Hair Loss Treatment Success Story

If the proteins are indeed evident, the findings could open up new doors to future treatment options something that would be welcomed by the medical community as Scarring Alopecia can be almost impossible to treat. In many cases the only option - and then only in certain situations, each decided on a case by case basis by highly specialised surgeons - is a surgical hair restoration procedure.

The US team actually began their study in 2008. It seems to be something of a slow-burner, however, with December of this year slated as the estimated completion date.

The team set out to recruit 25 people for the study all women aged 30 or over and planned to look at scalp biopsies taken both before and after treatment with steroids, a treatment for Scarring Alopecia that is quite commonly used in hospitals.

CCSA (or CCCA Central Centrifugal Cicatricial Alopecia) is sometimes referred to as Follicular Degeneration Syndrome as the two conditions are thought to be linked, or possibly even the same thing. It is a condition most commonly found in women of African ancestry, which in part explains why the North Carolina team have selected only women for their study. Specifically, fourteen patients in the study have CCSA, three have Lichen Planopilaris and three have Discoid Lupus Erythematosus. The remaining five in the study are control subjects with a healthy head of hair.

Whilst the vast majority of forms of scarring hair loss cannot be treated, if caught early enough FDS may respond positively. Belgravia has successfully treated a number of clients for FDS, which was almost always present alongside Traction Alopecia, through the use of bespoke courses featuring recommended formulations of high strength minoxidil.

Cases of Scarring Alopecia tend to pose particular problems because in many cases inflammation on the scalp has destroyed the hair follicles completely. When this happens, hair can no longer grow.

Leonora Doclis, senior hair loss specialist at Belgravia, explains: “Once scarring has set in, indicating that the follicle has died, pharmaceutical treatments are no longer an option. That is why it is particularly important to be proactive in seeking a quick professional diagnosis and expert advice as soon as you start to notice signs of hair loss.”

There are multiple hair loss conditions, not just the commonly-seen ones like Female Pattern Hair Loss, and many of the much rarer conditions can only really be correctly diagnosed by an experienced hair loss specialist.

Are There Any Options for Treating Scarring Alopecia?'

Are There Any Options for Treating Scarring Alopecia?'