Most of the children who use its services have lost their hair due to cancer treatment, or an autoimmune disorder which causes patchy bald spots - Alopecia Areata - or total baldness - Alopecia Totalis and Alopecia Universalis.

Now, having donated more than 5,000 wigs to both girls and boys over the past 10 years, the charity has launched a new initiative. aimed at encouraging young men and boys with hair loss from these issues to make use of their services too. 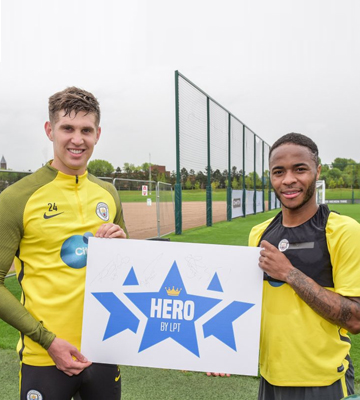 Hero by LPT is open to young men with cancer who are up to 24 years of age, and for boys with hair loss from medical conditions such as the various types of Alopecia Areata. It replaces the former 'Hair 4 Boys' arm of the Little Princess Trust.

The Little Princess Trust has a number of well-known supporters who have donated their own hair to the charity, including Jessie J and Harry Styles. Hero by LPT has also acquired special celebrity ambassadors including Will Butler the Worcester Warriors and England U20 rugby player and the Manchester City and England footballer, John Stones.

These sportsmen have offered 'their unconditional support' according to a statement released by Little Princess Trust. It also explains that, "In addition to these Ambassadors, a whole bevvy of celebrity ‘heroes’ have agreed that the charity can use outlines of their hair styles in order to encourage boys and young men to make contact. These endorsements show to boys and young men that every hero needs some sort of a hair style."

Hairstyles as worn by Wasps and England rugby star Tommy Taylor, Harry Styles post-hair donation, and the Argentinian international and Manchester City striker, Sergio Aguero, are just some of those that can be selected from the Hero by LPT website: herobylpt.org.uk.

"We want the boys and young men that we help to feel as comfortable as possible when they come to us. Hair loss can completely knock someone’s confidence boy OR girl," says Trustee, Co-founder and Case Manager for both charities, Wendy Tarplee-Morris. "We have created the Hero by LPT brand so boys and young men will know even more that we understand what they are going through and that we are here to help."

Suddenly losing their hair can be understandably devastating for children, especially as it is such a visible issue. It can result in teasing from other kids and - just as it can with adults - may cause negative self-esteem and confidence issues.

In the case of hair loss from chemotherapy, survivors' hair generally regrows fully within 12 months of their last session. There are currently no effective alopecia areata treatment options for under 16s, however.