Cosmetic treatments are back in the hair loss news again thanks to a new clinical trial which hoped to use carboxytherapy to treat various forms of alopecia.

Carboxytherapy is typically used as a treatment for cellulite, dark circles under the eyes and stretch marks. It is an invasive but non-surgical procedure which involves the use of infusions of carbon dioxide, usually delivered via injections, to the skin. It is also known as carbon dioxide therapy (CDT).

This research follows exploration into the use of popular anti-ageing procedure, fraxel laser skin-resurfacing to treat autoimmune-related hairloss from Alopecia Areata.

The new trial looked at carboxytherapy's potential application in the management of both autoimmune alopecia and Androgenetic Alopecia, more commonly known as Male and Female Pattern Baldness. 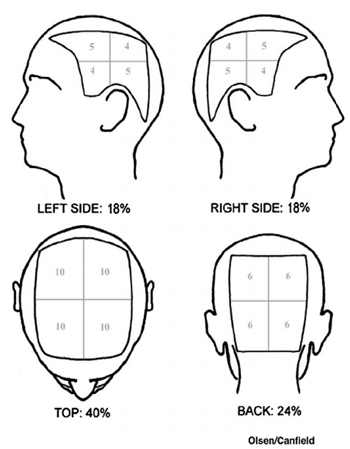 
Dermatologists from Tanta University in Egypt carried out the three-month trial and published their findings in the Journal of Cosmetic Dermatology.

Eighty participants were split into two equal groups, then each group was further divided in half, resulting in Groups IA, IB, IIA and IIB. Group I was made of of people with Alopecia Areata, whilst Group II comprised men with Male Pattern Baldness and women with Female Pattern Hair Loss. Group IA and Group IIA received carboxytherapy, whilst the remaining B groups were given a placebo.

Each volunteer was followed up with once per month for the duration of the trial, with clinical evaluations carried out on their hair. Dermoscopy and digital dermoscopy methods were used. The Alopecia Areata group's progress was appraised using the Severity of Alopecia Tool (SALT) tool, whilst those with genetic hair loss were measured against the Sinclair scale for women, and the Norwood-Hamilton scale for men.

What the findings uncovered was that, whilst both of the carboxytherapy groups demonstrated initial improvements, these regressed after treatment. It was noted that the benefits obtained waned during the course of the follow-up observation period, however, the individuals' results were still superior to before treatment was started.


As a result of this, researchers concluded that whilst carboxytherapy may seem a 'promising therapeutic option' for the scalp-only, patchy form of Alopecia Areata, and may be helpful 'as an adjuvant therapy' for Male and Female Pattern Hair Loss, more than six sessions would be required, with potentially on-going use needed to maintain results in cases of Androgenetic Alopecia.


At present there are already clinically-proven, MHRA licensed and FDA approved hair loss treatments available to treat both Male and Female Pattern Baldness. These are finasteride 1mg and minoxidil, though finasteride - a one-a-day oral tablet - is only permitted for medically-suitable men aged 18 years and over.

Either or both of these non-invasive, hair loss solutions can also be paired with additional hair growth supporting products - which fall under the same secondary grouping as 'adjunctive therapies'. This means that they are non-pharmaceutical and are complementary to the primary, established medications used to treat hair loss.

These supplementary products range from low-level laser therapy (LLLT) devices, such as the LaserBand, to highly-targeted food supplements, such as Belgravia's Hair Vitalics, which include biotin, zinc and selenium, and were specifically developed to support the function of normal hair growth.

When it comes to losing your hair, it is generally best to seek help as soon as possible - not least to ensure a swift diagnosis is made, taking away some of the anxiety that not knowing what to do can cause. Anyone worried about excessive or sudden hair fall can find out more about the currently-available options open to them by consulting a specialist hair loss clinic.