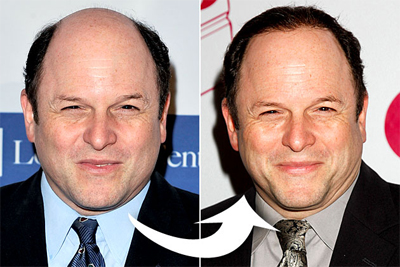 There are some celebrities who make no attempts to hide their hair loss, instead acting as ambassadors for charities or using their high-profile careers to raise awareness of hair loss conditions.
Other celebrities, however, will do anything to push back the inevitable signs of aging such as balding or thinning hair, and you may be surprised to learn which stars have been affected by hair loss.

, star of Two and a Half Men, recently revealed his ongoing battle to conceal his hair loss stylists on set help him to conceal his balding pate by using different coloured powders which are sprinkled onto the scalp. These powders are normally made using real human hair and the results can be hard to detect; it appears just like natural hair. It is not, of course, doing anything to stimulate the re-growth of natural hair.
Other celebrity secrets for hiding hair loss are more conventional; actor Jason Alexander has a very realistic hair piece which he often wears whilst actor Charlie Sheen is also rumoured to wear a wig on set from time to time. It’s even thought that Ben Affleck sports a hairpiece which covers part of his head, although sources close to the film star deny this.

Say no to extensions

We already know that many of our favourite female celebrities rely on hair extensions to create the illusion of longer, thicker hair; just look at Cheryl Cole and Naomi Campbell. But far from being used to hide hair loss, wearing hair extensions could actually cause Traction Alopecia by placing unnecessary tension on the hair shaft, weakening it and causing breakage. Hair extensions are definitely not a solution to cover hair loss and they should certainly not be used on hair which is already weak and damaged.

Of course, there will always be those celebrities who embrace hair loss, just as there are those who shun cosmetic surgery in favour of aging gracefully. Actors Jason Statham and Bruce Willis have both used their balding pates to further their career, enhancing their ‘bad boy’ images in action films such as ‘The Transporter’ and ‘Die Hard’ series respectively.
Anyone considering hair loss treatment should always see a hair loss specialist, who can diagnose the underlying condition, assess the degree of hairloss, and put together a tailored hair loss treatment programme for the individual concerned.