A dermatologist specialising in hair loss amongst Hackney's black communities has expressed concern that the shedding locks that many endure is a subject that is not taken seriously enough.

In an article in the Hackney Gazette, Dr Sharon Wong, consultant dermatologist at Homerton Hospital, explains that she regularly sees female patients whose thinning hair has had a dramatic impact on their life.

In many instances, the women are of Afro-Caribbean or African origin and a condition known as Central Centrifugal Cicatricial Alopecia (CCCA) is to blame for their hair fall. Dr Wong says that this and women's hair loss generally is frequently glossed over.


“It’s a condition that I think is unfairly trivialised,” Dr Wong told the newspaper. “Until it happens to you, you don’t realise the impact it has. Hair is not an essential structure, and you don’t need it for survival, but it’s so closely linked to identity and feelings of attractiveness."

She continued: “In history, it could be related to your culture or religion. It’s a statement about yourself. It’s so personal yet it’s so public for everyone to see. If people lose their hair they have been stripped of their identity and with that comes a feeling of anxiety, and people might undergo social phobias.”

Dr Wong's observations add weight to a growing school of thought that the most prevalent hair loss condition amongst black women is not actually Traction Alopecia something which is most commonly brought on when women choose to wear tight hairstyles such as braids or hair extensions for prolonged spells but CCCA.

In 2016, in fact, a study of more than 5,500 African-American women found that almost half of all those surveyed had experienced some kind of hair loss and that most of these cases appeared to fit with a diagnosis of CCCA.

For her part, Dr Wong says that she sees it as the number one cause of shedding among women with an Afro hair type where braids, weaves or chemical relaxers are a common feature. Her theory, which is echoed by other experts, is that a combination of genetics and styling techniques can lead to the condition, which manifests itself as inflammation of the follicles which results in a thinning crown or hairloss along the vertex (the top of the scalp). 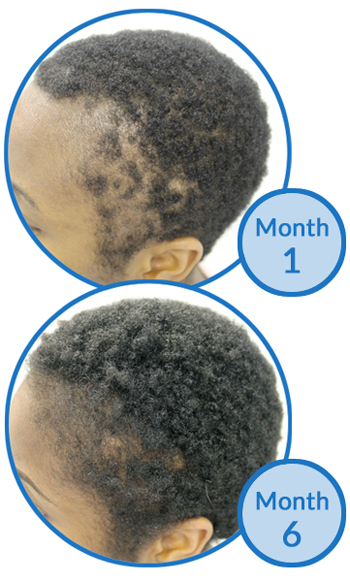 
CCCA is not widely understood which is something of an anomaly in itself given that so many people appear to be affected by it. Indeed, the aforementioned survey of African-American women found that less than 20% of those polled had thought about seeking expert help from a dermatologist. This seems to suggest that for many women with Afro hair, CCCA is almost an unspoken, "accepted" hazard that goes with the rigours associated with styling and straightening.

The condition was also recently linked to an increased risk of uterine fibroids in women of colour.

Luckily due to an increased awareness of the dangers associated with harsh hair-styling practices, especially on Afro hair which is naturally more brittle, the natural hair movement is gaining increased momentum worldwide. This encourages people of colour to wear their hair in its natural state without straightening it or using chemicals to give it a more Western appearance and texture.

Many people believe CCCA is linked to or synonymous with another condition known as Follicular Degeneration Syndrome. This particular hair loss condition, when treated very early, before follicles have died, can be targeted with a tailored treatment course.

At Belgravia, this would usually be based around carefully selected and topically-applied formulations of high-strength minoxidil from those available at the clinics' in-house pharmacies. Additional help would likely be offered in the form of suitable hair growth boosters, if a client's hair loss specialist deemed them appropriate.

Closely related to CCCA is Cicatricial Alopecia, also known as Scarring Alopecia, which describes hair loss from a group of conditions brought on by the inflammation of the scalp. If the hair follicles are destroyed as a result of one of these conditions, then scar tissue ensues and hair can no longer grow. Because of this, getting a timely diagnosis when any type of Scarring Alopecia is suspected is strongly recommended.