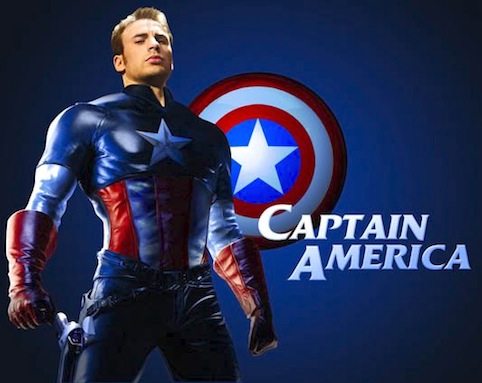 Hollywood actor Chris Evans (no, not that Chris Evans) has revealed that he is experiencing hair loss. The 30-year-old star of upcoming comic book flick Captain America: The First Avenger told online entertainment news publication E! Online: “I have no problem saying this, but I’m losing my hair.”

The actor’s latest film, due to be released next month, sees him transformed from a scrawny runt into the physically-enhanced patriotic superhero of the title.

Evans has expressed concern about what his hair loss might mean for his future in the role: “The fear is this can span 10 years so I can be doing this character until I’m 40. is supposed to be like this superior human being. He can’t be balding.”

Evans is contracted to star as the Nazi-battling superhero in at least three Captain America movies, as well as appearing as the character in offshoot of the franchise, The Avengers.

“How horrible would it be if this superior man has Male Pattern Baldness?” he added.

A superhuman with an all-too-human hair loss problem?

The Captain America film sees Evans's character undergo a series of top-secret military experiments to transform him into a super-human fighting machine. Why would the scientists responsible allow him to suffer from genetic hair loss, given the technology at their disposal?

That said, imperfect superheroes are all the rage on the silver screen these days, and it could be a neat twist to have Captain America battling hair loss even as he does battle with the bad guys.

In any case, Evans needn’t worry unduly, as his hair loss looks to be in the early stages, and if he acts now then he may be able to prevent it worsening.

While in real life we lack the technology to create a biologically-enhanced superhero, we do have the capability to help men to prevent baldness and treat hair loss caused by androgenetic alopecia.

If Evans were to visit The Belgravia Centre we could recommend a tailored programme of treatment for him based on his medical profile, lifestyle requirements, level and pattern of shedding, based.

In the first Captain America movie, Evans is treated with a top-secret serum to give him superhuman strength and reflexes. For treating hair loss there are also advanced pharmaceuticals, namely finasteride 1mg (oral) and high strength minoxidil (topical). both of which have been clinically-proven to be effective in the treatment of hair loss due to Male Pattern Baldness. Meanwhile, Evans, and others suffering from genetic balding, may benefit from a series of laser treatments and other specialised hair loss products depending on their medical suitability.