A campaign by YOU magazine in South Africa has come under fire from outraged cancer survivors after creating a controversial cover with a model sporting a bald head, digitally-shaven using image manipulation software.

The magazine's front cover showed model Lee-Ann Liebenberg proudly sporting a bald head, but it was later revealed she had not actually shaved her head in support of hair loss caused by chemotherapy instead retouchers at the magazine had used Photoshop to remove her hair. 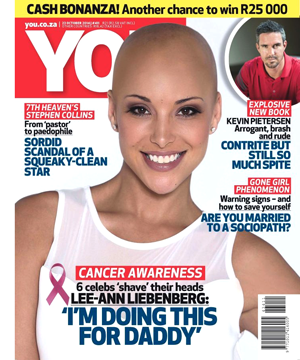 Lucy Balona, head of marketing and communications for Cansa, the Cancer Association of SA, said that they had been consulted by the magazine prior to the campaign's launch, and that they had no reservations, as they had previously partnered with Marie Claire magazine for a similar celebrity campaign.

Balona commented, “It was done by a previous magazine and we had such a positive response. So we were surprised by the negative reaction.”

As well as the cover model, five other celebrities connected to cancer survivors participated in the campaign, including Zakeeya Patel and Elma Postma. Cancer survivors took to the magazine's Facebook page to comment.

Raymond Strodl posted, “As a cancer survivor, I find this offensive. It is not a joke and cancer cannot be photoshopped away.” Another user urged the magazine's readers to complain to the press ombudsman, posting, “It is unacceptable to publish fake photos of so-called celebrities pretending to support cancer awareness.”

Whilst the feedback received by Cansa was mostly positive, the negative feedback must be respected. Balona said, “We work a lot with cancer survivors. We didn't realise they would be upset by it and we apologise for any offence caused.”

Linda Pietersen, editor of YOU, supplied the following press release in response to comments:

“For many celebrities, their hair is an integral part of their public image. So we love that so many have been brave enough to have our picture researchers 'shave' off their hair. We often cover heartbreaking news stories related to cancer, but we wanted to do something that would make everyone sit up and take notice. And our instinct to involve celebrities was not wrong.”

Chemotherapy, the form of treatment most commonly used for cancer, can cause hair loss when the drugs used in the treatment attack healthy cells and hair follicles as well as cancerous cells. Treatments such as cold caps can be used to reduce circulation to the scalp, preventing hair loss caused by chemotherapy, and it's hoped that in future, treatments will be available which don't cause hair loss as a side effect.