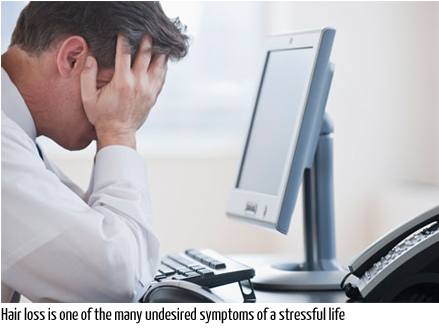 Over time, stress can take quite a toll on the human body. When we get stressed, numerous chemicals are produced inside our bodies. Many thousands of years ago these chemicals served the purpose of energising us and speeding our reactions for ‘fight or flight’. But today, when our problems are rarely solved by fighting or fleeing, these chemicals can have much more negative effects.

As Irish businessman Chris O’Hara discovered, one of these effects can be hair loss. O’Hara was, according to the Irish Independent, “once a high-flying businessman with a multi-million Euro Empire.” But as the recession hit Ireland, his catering industry businesses began to fail, and with them, his health.

Appearing at the Holiday World Show in Dublin, O’Hara said, “I was trying to create a business empire which I thought would bring me happiness, but brought nothing but misery and pain and, ultimately, it all unravelled in 2009.”

And as the fortunes of his company’s went from bad to worse, he began to notice some rather unpleasant side effects.
“Because of all the stress I got Alopecia and I had a lot of health problems,” he said.

Alopecia, or Alopecia Areata to give its full name, is a hair loss condition which results from an auto-immune disorder within the body. In those who contract it, the body’s own defences attack healthy hair follicles, causing them to cease producing hair, and hair loss to occur. Though there is no solid scientific proof as yet, it is widely believed that Alopecia can be caused by stress, such as that caused by managing a failing business empire.

It is unclear whether Mr O’Hara still has hair loss, but his method for reducing the amount of stress in his life might be considered extreme by some.

“One day I just said ‘no more I can’t do it any longer’.” And with that he packed all his belongings into a camper van, embarking on a road trip across first Europe, then western Africa. Now, he is currently planning a similar trip across Canada and the US on a budget of just five Euros a day, this time with a BBC documentary cameraman in tow.

“It’s a million miles away from how I used to live and it’s completely changed my life. I’ve never felt more liberated,” he told those at the Holiday World Show.

Of course, those lacking the means or inclination to pack their life into a van and leave the rat race behind may have to find different, less drastic ways of coping with stress. But reducing stress levels can be an essential part of dealing with Alopecia Areata. And once you have got these stress levels under control, there are hair loss treatments which can help to return your hair to health, and re-grow what has been lost. Contact us at the Belgravia Centre for a free consultation if you have any concerns about hair loss or fill in our online diagnostic form to obtain a personalised hair loss treatment plan that can be sent to you wherever you may be in the world.