Bright Australian Boy Points Out Benefits of His Alopecia Universalis

An Australian eight-year-old whose hair loss was caused by the extreme autoimmune disorder Alopecia Universalis has spoken out about some of the hidden benefits of waking up bald while still a schoolboy.

The boy named only as Oscar was being interviewed to help raise awareness for the Australian Alopecia Areata Foundation when he revealed that “the lady at the shop always gives me free chocolate and when I play soccer the guys on the other team don’t try to tackle me as hard.” We wonder if that happens to England's Jonjo Shelvey...? 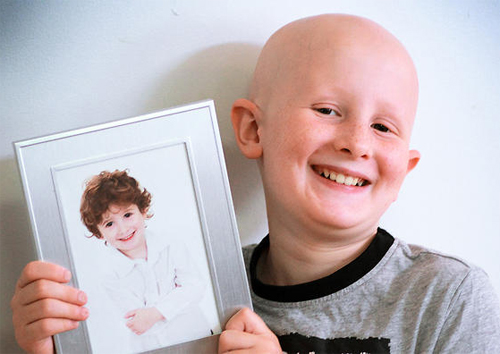 Additionally, he says, being bald may one day help him in his quest to become a rock star. Currently the drummer in a local band, he says that “people kind of expect you to look a bit different if you play in a band.”

It’s a wonderfully upbeat approach that perhaps belies the real difficulties behind Oscar’s 18-month struggle with Alopecia Universalis, a rare sister condition of Alopecia Areata, which leads to total hair loss all over the body including the scalp and eyebrows. In fact, when Oscar’s hair first started falling out in 2014, his parents Nick and Charmaine were terrified it was a sign of a serious illness.

Talking to Australian broadcaster SBS, his mother said: “When we found out it wasn’t cancer it was such a relief.” She also explained that the speed with which Oscar lost his hair was actually something of a blessing in disguise because it didn’t allow the family time to dwell on things. It took barely a month for Oscar to lose all of his hair.

A number of well-known people have Alopecia Universalis, including comedian Matt Lucas. However, because treatments available are not currently very inspiring in terms of the results that can be expected, many people with the condition choose to either except it and sport a smooth-headed look, or wear a wig.

Alopecia Areata is eminently more treatable using solutions such as high strength minoxidil  hair will, in fact, grow back of its own accord in many cases but Alopecia Universalis is a condition that is less likely to suddenly resolve itself. The good news, perhaps, is that there are a number of potential new treatments currently being investigated. These include several JAK-inhibitor drugs, which have seen some remarkable success stories in clinical trials although release dates may be a long way off yet.

For Oscar, all this is a long way in the future. For the time being he says he is content with who is is and that he is refusing to be defined by his hair loss. In fact, he seems happy to make light of it, and even organised a "Crazy Hair Day" at school, during which staff and pupils turned up wearing wigs, hair sprayed in multiple colours and assortment of wacky styles.

Not only did everyone have a great time, the event also raised more than $400 for charity.