Celebrity Big Brother contestant Austin Armacost was so moved by fellow housemate Gail Porter's battle with Alopecia Areata that he asked her to shave his head. The model intended his action as a show of solidarity and to show Gail that hair "is something that is not important". 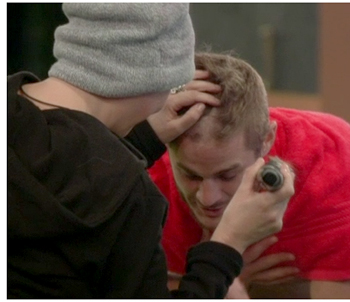 Gail, who has complete hair loss from head to toe due to a severe form of Alopecia Areata known as Alopecia Universalis, was visibly moved by the gesture. As she started to shave the American's head - and realised he was actually going through with it - Porter started to sob, clearly touched by his kind act.

Armacost decided to brave the shave after listening to the TV presenter's story about how she first lost her hair to alopecia in 2005. "I feel extremely ugly," Gail told a group of housemates. "I've dealt with having no hair for a long time but sometimes you don't feel as pretty as anyone else."

Speaking about what it's like to live with the autoimmune condition which has left her bald, she told a story about people shouting abuse at her in the street. "I go through every single day thinking how lucky I am - I've lost my mum and that was the hardest thing, and I know that other people have lost other people that they care about," she explained, "Me losing my hair... it means f*ck all to me but I don't like the way that people treat you because you're different."

Armacost told Gail, "You have proved time and time again that you are an amazing human being and an amazing woman and that is what matters. You are one of the most strong, independent women that I have ever met, no matter what's going on." Former Atomic Kitten singer, Natasha Hamilton, agreed, adding: "You can't define yourself with your hair."

Not convinced they understood, Gail retorted, "I swear to God if all of you shaved your hair off now and had nothing..." but kind Yorkshire-based Armacost interrupted with an offer to shave his head right then. Gail laughed and told him to do it, seemingly thinking he was joking. But when the star, who first found fame as fashion designer Marc Jacobs' boyfriend, came back with his electric clippers and handed them to her, she appeared taken aback. 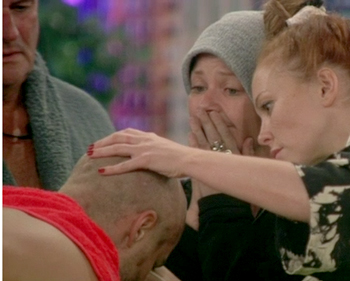 "I would be honoured for you shave my hair off," Armacost told her. "I want to say that you are an amazing human being with or without hair." Actor Christopher Ellison, who is also bald for another reason - male pattern hair loss - came over to watch Gail buzz Austin's hair off and quipped, "I'm beginning to feel a lot more at home here".

After the shave, Austin took Gail to one side and told her poignantly, "You're the same person you are without hair and I'm the same person I was 30 seconds ago when I had hair, and that's what'll be remembered".

This public show of solidarity and support for Gail Porter's struggle with Alopecia Universalis comes at an opportune moment, given it is currently Alopecia Areata Awareness Month.

Each year hair loss charities including Alopecia UK and the Little Princess Trust use this month in particular to highlight all forms of Alopecia Areata. By boosting the profile of this autoimmune condition, they hope to educate people and help those affected - whether men, women or children - to cope, as well as raising much needed funds.

Although there are treatments for Alopecia Areata in its mild-to-moderate stages which have been seen to produce encouraging regrowth, the success rate for Alopecia Totalis and Universalis treatment is far lower. Research is on-going into effective ways to combat these conditions which affect around two per cent of the entire population worldwide.