As the leading hair loss clinic in the UK and with a reputation that spans the globe, specialists from The Belgravia Centre are often called upon to give hair loss advice to the media. Here are some of the press articles they have been busy contributing to over recently... 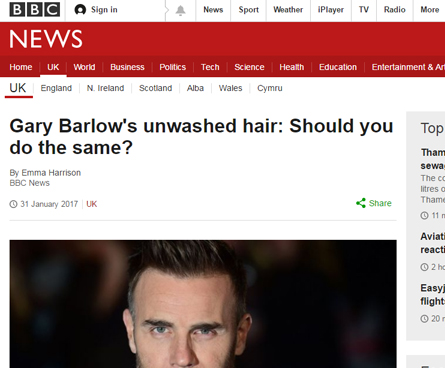 First up were the BBC, who wanted to know what Belgravia's experts thought about Gary Barlow’s revelation on Twitter that he had just washed his hair for the first time in 14 years. It was something of a surprise revelation that arguably had more fans going, “Eww!” than wanting to emulate his approach to shower time. As regular readers of this hair loss blog will already know, the “no ’poo” trend, as it has been called, is not something we would advise.

“Rinsing your hair is not going to be very effective after certain activities that make the scalp sweaty, such as exercising or using a sauna,” Belgravia is quoted advising, as well as pointing out that shunning shampoo is not going to remove bacteria from the hair or remove excess oil from the scalp if you are prone to greasy hair.

Wanting to avoid potentially harmful chemicals that may be found in some shampoos was entirely understandable, we agreed, but explained that there were many great shampoo formulations out there that did not contain such harsh chemicals so were kinder on the hair and scalp. 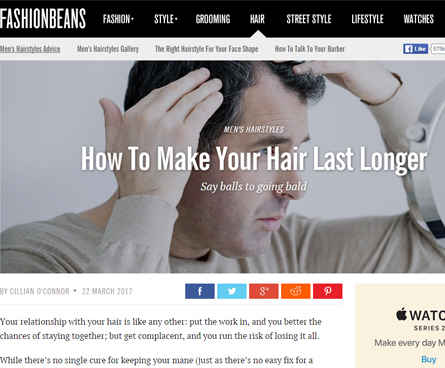 Next we were asked to settle the proverbial $64,000 question for the popular fashion and lifestyle website fashionbeans.com: how can men make their hair last longer? Senior hair loss specialist, Leonora Doclis, provided a range of advice on the causes of thinning hair, Male Pattern Hair Loss treatment, the dietary and lifestyle factors that can influence hair growth and tips for hair loss prevention.

She explained that, in men who are genetically predisposed to be affected by male pattern baldness, there are also factors which can accelerate its onset or speed up the rate of shedding in those already showing signs of hair loss. These include diet, lack of exercise and “bad habits” such as smoking or regularly drinking too much alcohol. Leonora also looked at ways to try and avoid these acceleratory factors, for example, did you know that some forms of exercise can be better than others for men who are worried about losing their hair? 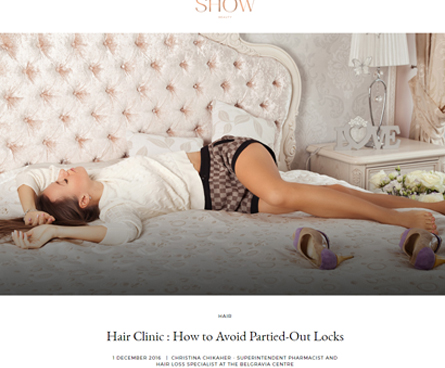 Finally, Belgravia’s superintendent pharmacist Christina Chikaher was asked to contribute to the showbeauty.com website for an article advising women “How To Avoid Partied-Out Locks”.

Among Christina’s top tips were to stay hydrated in order to keep hair frizz-free and load up on sweet potatoes to avoid or calm an itchy scalp. She also advised on choosing the right kind of alcoholic tipple to avoid greasy hair (Christina suggests that vodka is low-sugar compared to some drinks, the more sugary of which may lead to increased sebum on the scalp and inflammation).

She also said it might be a good idea to quit smoking: “Smokers may notice that the top and face-framing layers of their hair are brittle, causing strands to break off,” she said. “This is most likely because they’re malnourished cigarettes contain 4,000 different chemicals and gases and when you smoke, your blood carries around poisonous carbon monoxide gas which hijacks the red blood cells, preventing them from carrying oxygen around the body and hair and thereby inhibiting nutrient absorption.”

You don’t have to be a member of the press to get expert help; an initial consultation at Belgravia is free - whether it takes place in person at one of our Central London hair loss clinics, or via the Online Consultation form. During these sessions the reason for your shedding will be diagnosed, discussed with you and all of the most suitable hair loss treatment options available to you will be fully explained.