A high percentage of women whose hair loss is caused by cancer-fighting drugs state that the psychological effects of this dramatic and very visible change often knock them for six. BBC journalist Victoria Debyshire, currently undergoing a course of chemotherapy for breast cancer, is no exception.

The journalist has been chronicling her brave cancer journey through a series of video blogs, the latest of which included a revelation that she was now wearing a wig. “One of the things that I’m finding difficult to come to terms with is losing my hair,” she says. “I would say that I have lost about 30-50 per cent of it.” 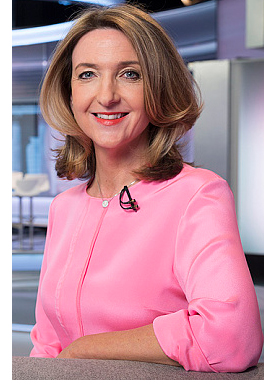 Victoria Derbyshire before her diagnosis

Just after washing her hair in one video, Ms Derbyshire shows the amount of hair in her plughole. Picking up the clump she says that hair loss of this nature was to be expected but that she is somewhat surprised to see how much there is. “There’s quite a lot,” she says, with a nervous laugh.

In another video, the journalist removes her wig to show the extent of her hair loss: her hair has been cut above the shoulders and is noticeably thinner than normal.

Ms Derbyshire didn’t lose all of her hair during cancer treatment, which may be because she used a scalp cooling system during treatment. As she points out when staring at her hair in the plughole: “If I hadn’t worn the cold cap twice, it might be way more than that.”

Cold caps have been around for decades and one type, the DigniCap was recently cleared by the FDA although the version used by Ms Derbyshire is made by British firm, Paxman who invented the machine. They are becoming an increasingly popular option for women who are undergoing chemotherapy treatment, but cannot be used in every case.

As they work by 'freezing' the scalp to inhibit blood flow during treatment in order to deter the chemicals from being circulated to the hair follicles - as can be seen in the video below - cold caps have been reported to be somewhat uncomfortable to use, but many women consider the inconvenience well worth it for the chance of keeping some or all of their hair. Continues below

It will be spring of this year before Ms Derbyshire completes her treatment, which will also include a series of radiotherapy, and she has said that she expects more hair loss to occur. She has, however, said on camera that she has also got used to wearing a wig, which, she says, “is something I never thought I’d be able to say. It lets me just crack on and get on with things which is absolutely great.”

The journalist is optimistic about her hair growing back, as it does in many cases once chemotherapy drugs have left the body. In most cases hair starts growing back just a few weeks after treatment has been completed, although it can be six months before hair regains the fullness that was seen before treatment began.