Bald Politicians – Will Voters Accept a PM with Hair Loss?

Earlier this week Radio 4 ran a documentary called ‘The Age of Ming’. While this might sound like a sci-fi series on Flash Gordon’s evil arch enemy, it was in fact a look at how age and image affected the political career of Sir Menzies Campbell during his brief spell as leader of the Liberal Democrats from March 2006 to October 2007.

In the programme, broadcaster Robert Orchard explains how many people thought that Campbell, affectionately known as Ming, was hounded out of office by a media “obsessed with his age and appearance”

Ming’s CV makes for an interesting read. A former Olympic sprinter, a successful barrister and a well-respected politician who has overcome cancer in recent years, Ming look all set to confidently assume the role as party leader when Charles Kennedy was forced to resign amid revelations of his problems with alcohol.

However, Ming’s leadership was clouded with negative comments about his image. His press secretary at the time, Puja Darbari, recalls that every interview contained questions about her boss’s age. 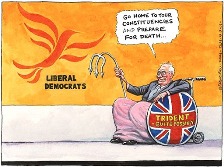 In the radio programme Ming says, "No cartoon ever appeared without me looking totally bald and derelict, with a Zimmer!" One cartoonist, Steve Bell of The Guardian, was particularly vicious about his wrinkles and hair loss. The jibes didn’t come just from cartoonists, who are sometimes known for their cruelty, but also from high-brow journalists. "The new leader is guilty of the most dreadful of all modern political crimes. He is not young," said The Financial Times. "His age is, sadly, also a factor," stated The Independent.

Even members of his own party pitched in. Senior Lib Dem Lord Steel remarked that he "acted old, he looked old, he looked Establishment". Kinder words came from deputy leader Vince Cable who said that Sir Ming was "kicked to death" because of his age or his manner, and noted that it was "very unfair and very damaging".

Sir Ming would have been 69 if Gordon Brown were, and as he indeed has, to delay the next general election until 2010. With his age overshadowing every other issue on the agenda, Ming decided to bow out and left his deputy, economics expert Vince Cable, in temporary charge. Although he was another balding man in his 60s, Cable had the (now much-needed) experience for the job. However the Lib Dem MPs wanted someone more youthful and Ming’s resignation had added fuel to the fire. According to The Sun, that there was "No room for pensioners" in today's cut-throat politics. The Mirror described Ming as "an Edwardian gentleman in the internet age".

But is this the world of modern politics in the media age? Do politicians need hair to attract the voters and impress the establishment?

Daniel Hannan, a writer, journalist and Conservative MEP for South East England, thinks so. In an article he wrote in September 2007 for The Telegraph, he points out that the last three Tory leaders, William Hague, Iain Duncan Smith and Michael Howard, although “impressive and inspiring" were unable to "match Tony Blair follicle for follicle”. He even puts the failure of balding Labour candidate, Neil Kinnock, to beat Conservative candidate John Major in 1992's general election down to The Sun’s front page which portrayed Kinnock as a lightbulb.

It is not all bad news for bald politicians. As Hannan points out, there are instances of baldies beating other baldies such as Churchill and Atlee, Salisbury and Gladstone. But are there any occasions when a bald man has beaten a hairy man? Hannan digs deep into British history but the only examples he can find of success for the balding over the hirsuite, are Russell (PM 1846-52) and Canning (PM 1827) both of whom were not directly elected into office.

In his book, ‘Vote for….How?’, Jonathan Maitland, a journalist and presenter, examines what makes politicians attractive to the voting public. Maitland is of the opinion that the converging of policies of the major parties in recent years has led to the image of their leaders becoming more significant. He highlights polls that were carried out around 2005 and says it is clear that of the 800,000 crucial swing voters, 60% say the most important thing for them is image. "Forget health, education and transport, and think hair, elocution and teeth," he said.

In a lead article for BBC News online, published in April 2005, Leonie Roberts, of the Federation of Image Consultants, agreed that baldness can trigger a powerful reaction and can make people seem older than they are. However, on a more positive note, Roberts also points out that baldness may also be associated with virility, truth and wisdom.

Maitland agrees with the idea that image is more complex than mere physical attributes. Indeed, a recent article in The Times by Clinical Bio-Chemist and Vice Chancellor of Buckingham University, Dr Terence Kealey, looks at how the evolution of art and hairlessness were interdependent. The story, entitled ‘Guys, be glad to be grey or thinning on top’, explains how a girl with less hair could paint her skin, tattoo it, decorate it and wear different clothes thereby attracting more men. As a result her children, even the males, were less hairy. This is how we became the ‘naked ape’.

Dr Kealey explains that hair plays a social signaling role in many older mammals; grey hair on men can reinforce an alpha message of chiefdom, as can baldness. But he goes on to say, “The biology of baldness is complex. Men have evolved to attract women…and because only some men go bald, we must assume that different women are attracted differently”. So while Ming and Cable unfairly lost political support as a result of their baldness, it seems that, in terms of evolution, they may be the winners.

If you are experiencing balding and would like to learn more about available hair loss treatments, please feel free to email us or call us at the clinic on 0207 730 6666 where we can arrange for a free initial consultation with one of our hair care specialists. Alternatively, if you are unable to make it into the clinic, you can fill out the online diagnostic form and a treatment advisor will be in touch with you shortly.