People with the autoimmune disorder Alopecia Areata which leads to sudden, patchy hair loss are often in for a very rough ride, something that can be made all the worse by a feeling that they have somehow become different to the rest of society.

Even though the condition affects around three per cent of all people in their lifetime, it remains relatively rare to see someone with the type of patchy hair loss that Alopecia Areata causes as it can often be concealed under a hat, a headband, an innovative hairstyle or a clip-on hair extension. When the condition is more extreme, however, and the shedding intensifies leaving the head either entirely bald, as with Alopecia Totalis and Alopecia Universalis, it can feel like the whole world is staring at you.

When this becomes your everyday life, everything can seem a struggle getting ready for school or work can take longer; medical appointments can eat into your schedule and in many cases social activities become avoided. In a world that seems full of people with full heads of hair, it is easy to feel like an outsider.


Luckily, support from charities like Alopecia UK can help as can small victories that might not seem very important to others but which are a very big deal to you. Things like adding a bald emoji icon to the selection that is currently available something that one young woman with Alopecia Areata has been petitioning for for some time.

Her name is Jade, and her struggles with severe Alopecia Areata have been chronicled on her website Life On A Strand. In a posting about her quest to see a bald emoji introduced to the world, she writes: “How many emojis would you say that you use a day? 10? 50? 100? So many of us send thousands of these cute smileys without even realising. They have become part of our everyday life. But, one thing I've noticed is that they don't have one which represents being bald. Millions of people in the UK alone suffer with hair loss, children and teenagers included. With the emoji family constantly growing, and an update just recently of 100 more, my mission is to speak on behalf of those suffering with hair loss. And get Apple to listen to us!”

More than 200 people have signed Jade’s petition, with supporters often experiencing hair loss themselves. “As someone receding at an alarming rate,” writes one, “this is becoming a serious issue. How can I truly express myself in emoji form when there is no emoji representing the follicly-challenged?”

Her work seems to have paid off: according to an article on the BBC's website, the Unicode Consortium the body which approves new emojis that a series of bald emojis will be released in June 2018. As well as this, ginger, grey and afro hair emojis will also be in the new drop, to help make the little faces as representative of as many different people as possible.

UPDATE (6/4/2018): The Unicode Consortium has released images and information about the roll-out of the new bald emoji, as well as curly, red and grey-haired emoji, on its website which states that these these have all been recently added in version 11.0 - click here to view them. 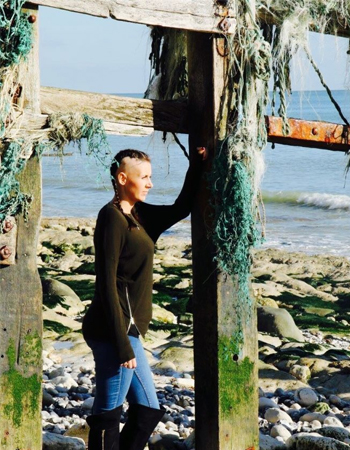 Jade from Life On A Strand, who successfully petitioned for bald emojis to be released


Jade’s hair loss is of the type which can be very difficult to treat as it is so pronounced.  There are a number of types of autoimmune alopecia of which Alopecia Areata is the only one to have effective treatment options at present.

In mild cases the hair should normally regrow naturally within up to 12 months, though if or when this hair growth will resume is unknown - something which can be extremely infuriating for those affected. In these cases - when the rounded bald patches affect the scalp only - professional treatment can often be effective, as can be seen in Belgravia’s Alopecia Areata Treatment Success Stories gallery.

The Alopecia Areata treatment provided via Belgravia's in-clinic specialists and pharmacies is for this scalp-only patchy hair loss version. It involves recommended formulations of high strength minoxidil being applied directly to the affected areas to help encourage regrowth through opening the potassium channels. This drug is usually paired with further appropriate hair growth boosters tailored to the individual's requirements and medical suitability.

Of course the bald emoji will also be useful to people undergoing cancer treatment and men who have lost their hair to male pattern hair loss. Interestingly, though both men and women can be affected by genetic hair loss, it is only men who tend to experience true baldness. Women with female pattern hair loss instead develop thinning hair across the top of their head which may become intense, but rarely deteriorates to the point of acute baldness.