How people choose to deal with hair loss is a very personal business. Whilst some men cannot bear the thought of thinning, others actively embrace this aspect of ageing.

Judging by his new look, we'd say Maroon 5 frontman, Adam Levine, falls into the latter category, having recently shaved off all his hair, leaving him completely bald. 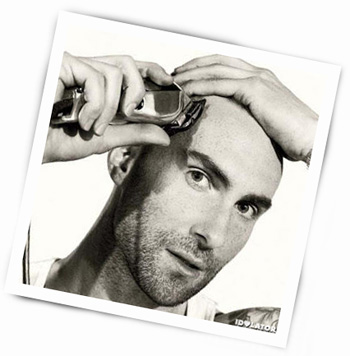 During his latest appearance as a judge on the American version of talent show The Voice, Levine's dark locks were gone, replaced by a shiny, freshly-shaved head.

The 36 year old responded via Twitter: 'Excuse me. Lex Luthor was bald. I have "shaved" my head. Meaning, shaved by choice. Big difference. Ok?!! Ok?!!' This was shared 3,200 times, showing what a hot topic his apparent hair loss was amongst his fans. 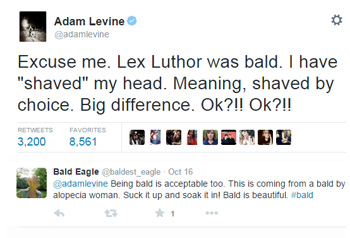 Although both are bald, the fictional Lex Luthor is thought to have lost his hair to scarring alopecia following a fire, not as a result of male pattern baldness.

One of the many responses Levine's tweet received came from 'Bald Eagle', a Twitter user with another form of hair loss - Alopecia Areata - who reminded the star, 'Being bald is acceptable too. This is coming from a bald by alopecia woman. Suck it up and soak it in! Bald is beautiful. #bald'

Although his baldness has only just been seen on TV, the Grammy award winner actually shaved his head around three months ago, and documented the process on his Instagram page.

His hair is now growing back again and looks thicker than ever. Whether this is his natural hairline or not has been the subject of much speculation though, both in the media and in online hair loss forums. Many suspect Levine of having had hair transplant surgery to make the thinning hair around his temples appear thicker.

Fans of the 'Moves Like Jagger' singer noted that the star's hairline has changed shape over the years, now appearing lower and fuller than in previous years. As you can see from the photos here, it does indeed look like Adam Levine may have had a receding hairline as his hair appears to have taken on more of a widow's peak shape in the past. 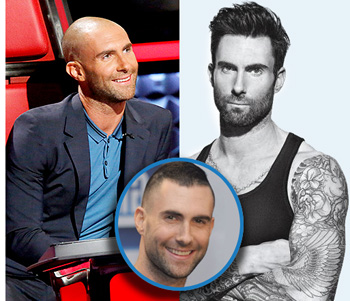 Levine has a scar in-line with the start of his left eyebrow which extends through this hairline and accounts for some of the unevenness.

As his hairline appears to change, so too does his haircut and this longer length, perhaps combined with thickening fibres or makeup used to fill in the hairline - common TV grooming tricks for concealing hair loss - may also help to disguise thinning temples.

Without examining him it is hard to tell whether or not Adam Levine has had restoration surgery, but it is worth noting that any thickening that has appeared in that area could also be down to the use of hair loss treatments. Specifically, the topical use of high strength minoxidil which is applied directly to the hairline and has produced promising regrowth results in many Belgravia clients. This is often an option worth exploring for men who want to hang on to their hair and do not feel comfortable shaving their head.

Whatever the reason behind his latest hair changes, it looks like Adam Levine has the confidence to carry off the bald look, and as an added bonus, his wife - Victoria's Secret model, Behati Prinsloo - says she loves it!