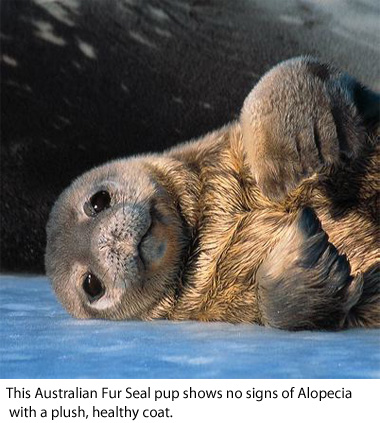 While many people associate hair loss strictly with humans, it can also affect animals, as illustrated by a recent article in the Journal of Mammology.

For fur seals, a thick coat of hair is not merely a matter of aesthetics, it is crucial for their survival. So when a colony of 30,000 Australian fur seals began suffering from patchy hair loss, researchers and conservationists were particularly concerned.

The condition has been labelled as Alopecia, though this is a simply a scientific name for hair loss, and is not linked to the human hair loss condition known as Alopecia Areata. The seals’ hair loss was first spotted as far back as 1989, and today continues to affect individuals in the seal population of Lady Julia Percy Island, off the South East coast of Australia.

Researchers are yet to discover the cause of the hairloss, but a recent three-year study has found that it is having a negative effect on the health and survival of fur seals affected by the condition. After observing the seals in their natural habitat and examining over a hundred captured animals, the Australian researchers found that those affected by the Alopecia had a ‘poorer body condition’. They also found that surface body temperature in balding areas was on average 6.6°C lower than areas with a full covering of fur.

As with many human hair loss conditions, they found that the Alopecia was more prevalent in certain parts of the fur seal population, with females and juveniles being most likely to be affected.

The researchers are now looking into possible environmental factors which may be the cause of the seals’ hair loss.

Other cases of animal Alopecia


This is not the first time that Alopecia has been recorded amongst animals. Last year we reported on the strange case of Guru the chimp. The 20-year-old male chimpanzee at Mysore Zoo in India has suffered from Alopecia since the age of three, and it has now reached the extent where he has lost virtually all of his body hair.

Guru began suffering from hair loss after being rescued from a circus where he was poorly treated. Zoo vets suspected that his hair loss may have been caused by the stress and trauma of his experience: a common Alopecia trigger amongst humans.

A year earlier meanwhile, it was discovered that a group of spectacled bears in Leipzig Zoo in Germany were suffering from a hair loss condition, which was leaving them almost bald. In this case too, the stress of captivity was suspected to be the reason for the condition.


Humans can suffer from a form of hair loss known as Alopecia Areata. The condition generally begins with patchy hair loss over the scalp, though it can progress to affect the entire scalp (Alopecia Totalis) or even the whole body (Alopecia Universalis).

The exact cause of Alopecia Areata is not known, but as with these animal cases it is thought to be triggered by stress and traumatic events.