Football banter, as everyone knows, can be cruel, but Arsenal player Alex Iwobi must have been left well and truly stumped when his team-mate Rob Holding ribbed him about hair loss during a live Q&A session on social media.

Iwobi who has what may well be one of the fullest hairlines in the Premier League was wearing a bandana during a live session answering fans’ questions on his Instagram account when a message popped up from a verified ‘rholding95’ account asking, “You trying to hide that receding hairline?” 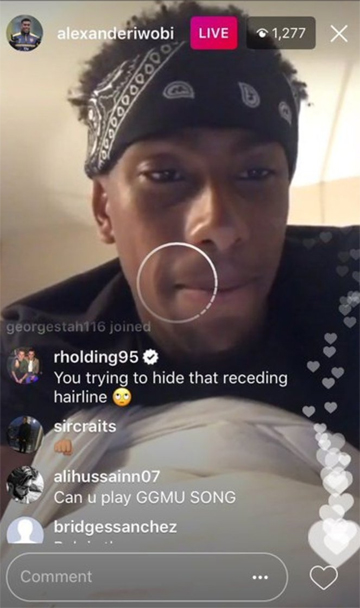 No signs of receding


At just 21, Iwobi would be unlucky indeed to be losing his hair, though it is actually possible for men to start shedding their locks to the genetic condition Male Pattern Baldness when they are still in their teens. In fact, many footballers seen on the field show signs of androgenetic alopecia (and occasionally, other conditions), and many more may be furtively keeping thinning hair at bay by following courses of male hair loss treatment to stabilise shedding and encourage regrowth.

Whilst appropriate treatments can often help to regrow a receding hairline or thinning crown, unfortunately for the Arsenal team, their manager Arsene Wenger has reportedly tried to ban players from using all medications that are not for sports-related conditions. Prescribed drugs taken for strained ligaments and the like are fine, but diet pills, ‘water tablets’ and hair loss remedies are apparently out.

Wenger was concerned that non-essential drugs - especially when players do not disclose what they are using to those treating them for injuries - may interfere with recovery times. It seems, however, that he has little if any evidence to back this up, and his statements were something that the club seemed keen to distance itself from.

It’s also worth pointing out that medications, including hairloss treatments, are regulated in the UK by the MHRA, which checks their safety and tolerability before licensing them. The World Anti-Doping Agency has also allowed the key hairloss medications, minoxidil and finasteride 1mg, for use by professional sportsmen after a ban on finasteride 1mg was lifted in 2009.

What’s interesting is that a Harley Street doctor has recently suggested that some footballers who are losing their hair may not be doing so just because of male pattern hair loss, but by repeatedly heading the ball. He suggests that a study involving players may show that receding hairlines in some cases could be due to inflammation caused by impact on the scalp during matches and training. This stress could, of course, also trigger or accelerate male pattern hairloss in men with an underlying genetic predisposition.


While Rob Holding’s gentle ribbing seems to have been a little misguided, there are plenty of footballers indeed, plenty of men who are in their 20s and 30s and feel like they are in the prime of their life, but whose reflection in the mirror is a daily reminded that their hair is thinning, or their hairline receding.

Early intervention in the form of a hair loss treatment course, featuring MHRA licensed and FDA approved medications suited to the individual user, can often help in preventing baldness. By taking a proactive approach and seeking expert assistance when the first signs of hair loss start to appear it is often possible to stabilise hair fall, promote new hair growth and improve hair density. Each person affected by hairloss will have a unique pattern and rate of shedding but, as long as their follicles are still active and producing hair - no matter if it is thinning, this approach can be a viable option.

There are over 1,500 entries in Belgravia's hair loss treatment Success Stories gallery which show the kind of results clients have achieved, and the time in which it took to see them, by way of example.