Amanda Bynes Tells Of Hair Woes As She Gets More Extensions 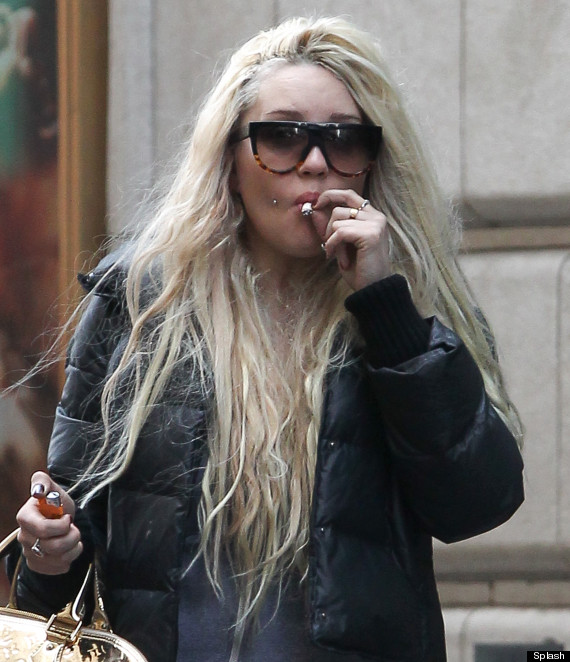 Amanda Bynes, former Nickledoen actress and child star, has been pictured out in New York apparently shopping for a hat after she complained on Twitter about the state of her hair and her visible hair extensions. The troubled star, who has recently managed to avoid jail despite two hit and run convictions, has been experimenting with different wigs and hair colours in recent weeks but seems to have settled on blonde locks for now, with hair extensions visible at her hairline despite the risk of hair loss that they create.

Wandering the streets of New York, Bynes had pushed her hair back off her face, with the unfortunate result being that her extensions, which appeared to be attached all over her scalp, were in full view. The fact that the extensions were positioned all over her head, as supposed to at the back of the scalp which tends to be the more popular position in order to prevent the attachments being seen, may be down to the fact that the star recently claimed to have shaved her head.

Ranting on Twitter, the Hairspray actress complained about a magazine publishing unflattering pictures of her, stating: "please post my pics anytime! I had to shave my head because of hair damage from someone @ John Barrett so I'm not loving my paparazzi pics for a few years! I have extensions but you can see them!"

Bynes is certainly not alone in turning to hair extensions to solve issues with the quality and thickness of hair. The quick fix of extensions can instantly make your hair appear thicker and longer, however the damage that extensions can do over time to hair can often outweigh the benefits. Hair extensions like Bynes's are designed to be worn 24 hours a day, and whilst clip in extensions give hair some reprieve when taken out at night, hair extensions when worn constantly can put a great deal of pressure on the hair follicle due to their extra weight.

This sustained pressure can lead to a condition called traction alopecia. This type of hair loss occurs when follicles become damaged from the pressure of hair extensions and produce weaker hair as a result, which breaks easily. A vicious circle can then begin where hair extensions are attached further back on the head to healthy hair, and the process begins all over again. Just look at Naomi Campbell's hair.

Don't Do A Naomi

The first step to preventing hair loss from traction alopecia is to cease using extensions or other hair attachments that put pressure on the hair, as hard as this may be if you rely on hair extensions to achieve the hair style that you want. Secondly, if your hair is already feelings the effects of the pressure, a high strength minoxidil cream as part of a clinically proven hair loss treatment programme can help to regrow hair in the damaged areas providing follicles are not yet dead.

Minoxidil varies in strength, so it's important to see a hair loss specialist for a free consultation in order to establish the ideal formulation for your specific case. Alongside minoxidil, a number of treatment boosters are also provided in order to ensure that your hair is kept in great condition, from specialist shampoos and conditioners to our nutritional supplement Hair Vitalics: you never know, you might not feel the need to wear hair extensions again!