sufferer Victoria Petkovic-Short has appeared naked in this month’s issue of Cosmopolitan. The picture was part of the Pretty Bald nude charity calendar, organised by 26-year-old Victoria. 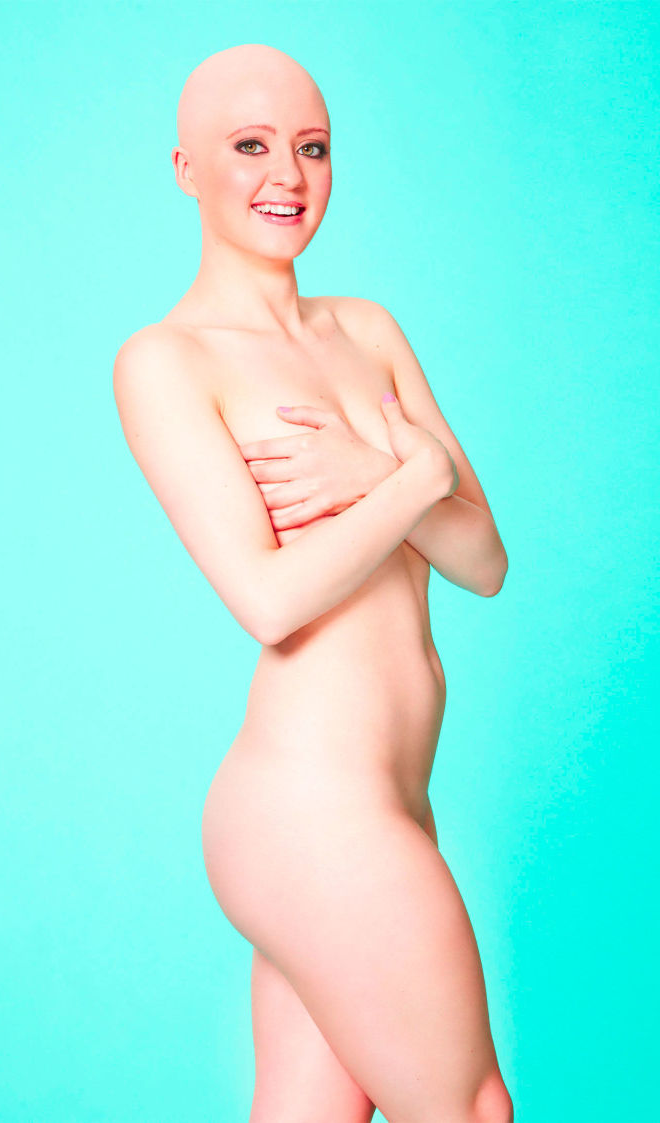 “All of the hair on my body was gone”

Victoria, who started losing her hair when she was 21, said she has learnt to become proud of her body and the way it looks: "I first noticed a smooth patch on my scalp in February 2011,” said Victoria, “I wasn't worried, but then I found a second patch and a third."

After she was officially diagnosed with Alopecia, Victoria started a steroid treatment: "Although there is no cure, doctors said steroid injections might help so I gave them a try. The pain was indescribable and my hair kept falling out. I stopped the injections and by November, all of the hair on my body was gone.”

"It was such a shock, I cried my heart out. I'd been in denial, thinking there was something I could do. I was angry with my body for letting me down, with the doctors for having no cure, and angry at myself too. But I was determined it wouldn't beat me or define me."

As Victoria struggled to come to terms with her hair loss, she had a number of bad experiences, particularly with treatments that didn’t live up to their promises. "My first experiences of treatments were awful,” said Victoria. “One consultant sold me aloe vera juice for £30 a bottle that did nothing”.

Unfortunately Victoria’s experiences are far from unusual. Whilst it can be possible to regrow hair using treatments for Alopecia Areata, and indeed we at Belgravia have seen many clients with significant regrowth from following a course based around our bespoke minoxidil formulations, there is currently no cure for Alopecia Universalis, where all the hair on the body is lost. However, there are many clinical trials underway looking into potential cures for this hair loss condition, including studies into JAK inhibitor drugs which are producing promising results in clinical trials though more testing is still needed due to the potential side effects and varied efficacy.

“I’m stronger for being bald”

Several years on from starting to lose her hair, Victoria is finding the positives in her condition: "On bad days when my hair was falling out, I'd make myself think of one good thing about it. I'm stronger for being bald. It's taken time to get to this point, but I know I can't change it, so I might as well make the best of it. I'm more confident now than I've ever been." Victoria’s stunning photos in Cosmopolitan will surely boost the confidence of other women with hair loss, as well as her own.

You can read Victoria's full story in the current UK issue of Cosmopolitan magazine, and find her as Miss March in the Pretty Bald charity calendar which is available from prettybald.co.uk with proceeds going to Alopecia UK. For more information about the range of high strength minoxidil formulations available from Belgravia's in-clinic pharmacies, please contact the clinic on 020 730 6666 or send us a message.