If you’ve not yet sent out your Christmas cards, there may still be time to stock up on a design currently on sale by Alopecia UK, the much-respected UK charity that helps people with a particular kind of hair loss.

Caused by the autoimmune disorder Alopecia Areata, the resulting hairloss - from small patches on the scalp to more severe strains which cause total baldness of the head, or head and body - can be extremely distressing when it strikes. Alopecia UK are right there at the front-line offering help, advice and support for people with the condition. In the UK alone hundreds of thousands of people will be affected in their lifetime. 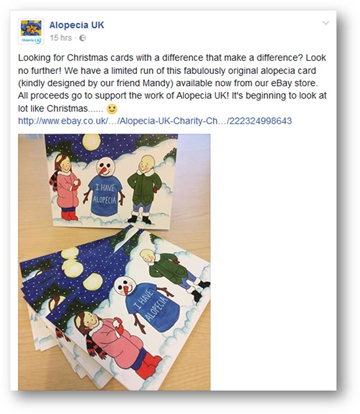 This year for the first time ever, the charity has released a charity Christmas card to help raise funds for their work. It was designed by Mandy Eaton-MacLean, a friend of the charity with Alopecia Areata, who found time to create the illustration for the card while working on a forthcoming story book about Alopecia Areata aimed at three-to-seven-years-olds.

Mandy’s Christmas card features two young children, both demonstrating the kind of hair loss often seen with Alopecia Areata, putting the finishing touches to a snowman who is wearing an ‘I Have Alopecia’ t-shirt. The price, inclusive of P&P, is £10 for 10, and the cards are available from Alopecia UK’s ebay store. At the time of writing, more than 60 packs had been sold.

Alopecia is always a sensitive subject, especially when children are involved, as it frequently leads to teasing and a lasting sense of being “different”. Additionally, some of the treatment options available to adults are not available to children, and in many cases children and their parents find themselves hoping that theirs will be one of the more “lucky” cases in which hair does grow back on its own, which it quite often does.

Unfortunately, if hair does grow back of its own accord there is no guarantee that the bald patches caused by the disorder won’t return. For this reason, adults often appreciate the guidance and treatment options available at a specialist hair loss clinic. 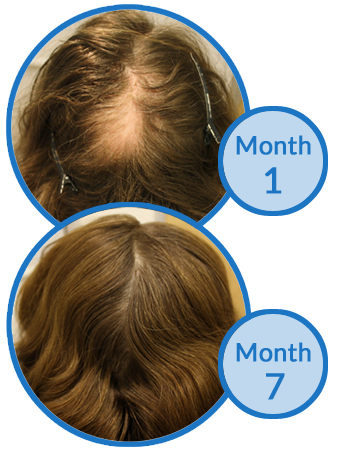 As well as being the first time Alopecia UK has created a Christmas card, 2016 may well be remembered for a series of potentially very important developments in the field of Alopecia Areata-related hair loss research.

Scientists in the US, among others, are currently working on potential new treatments based on an existing class of drugs named JAK inhibitors, which have proven to generate some pretty remarkable hair growth in a number of early days, small-scale studies featuring test subjects with the severe and currently untreatable versions of alopecia: Alopecia Totalis and Alopecia Universalis.

It may well be many years before a new product is brought to market, though, as there will be regulatory matters to resolve first. Among these are the fact that some JAK inhibitors have some rather strong and unpleasant side-effects. In order to potentially reduce this risk, topical applications of these drugs are also being trialled, in addition to the oral formulas.

A recent study into the use of PRP scalp injections as a potential treatment for people with Alopecia Areata have shown promise thug wider trials are needed to confirm these findings.

In the meantime, if you are concerned about sudden hair loss or develop rounded bald patches anywhere on your scalp and would like to speak to a specialist about it, it can be comforting to know that there is support and effective treatment already available.