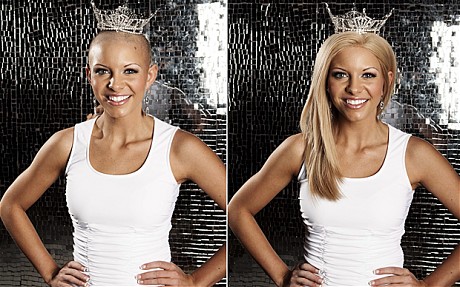 The Miss America beauty pageant, now in its 90th year, was originally set up to give young women across America the chance to show off their inner and outer beauty to the world (or as a tool for the newspapers of early 20th century America to boost their circulation, depending on your level of cynicism).  This year Miss Delaware, Kayla Martell, struck a chord with millions of American’s, and was voted into the final live competition on Saturday as the ABC network’s viewer-voted ‘America’s Choice’ contestant.

A beauty queen with a difference

Whilst on the surface Kayla might seem the same as many of the other contestants vying to become America’s top beauty queen - blonde, beautiful, slim and charismatic - a closer look reveals much more than meets the eye. For Miss Delaware is an Alopecia sufferer, and her blonde locks are in fact a wig.

Kayla has suffered from hair loss since the age of ten, and beneath her pageant wig she is virtually bald, and has been since she was 18. But her condition has not deterred her from pursuing her dream of becoming Miss America. After entering the Miss Delaware beauty pageant no fewer than five times, she finally won the title last summer, earning a place in the national event.

Since becoming Miss Delaware she has worked tirelessly to raise public awareness of Alopecia and female hair loss, and this was her ‘platform’, or cause, for the Miss America Pageant.

Kayla suffers from Alopecia Areata, a type of hair loss which results in patchy baldness, which can spread to the entire scalp (Alopecia Totalis), or the whole body (Alopecia Universalis). The exact causes for the illness are not known, but it is thought that is linked to an auto-immune dysfunction which results in the sufferer’s own immune system attacking healthy hair follicles. According to the NHS, it affects roughly one percent of the population, and can strike at any age.

For the Miss America live final event in Las Vegas last weekend Kayla wore a number of blonde wigs, but she has in the past competed in pageants without a hairpiece, and is certainly not afraid to reveal her natural look in public.
She was added to the final line-up of fifteen contestants after being voted ‘America’s Choice’ by viewers of the ABC television network- a testament to the level at which she has captured the hearts and minds of the American public, particularly those suffering any kind of hair loss.

On Saturday she went on to compete in the final ten, participating in swimsuit, evening gown and talent segments of the competition, but did not make it into the final five. The event was eventually won by 17-year old Miss Nebraska, Teresa Scanlan.

However, Kayla’s success at the pageant remains an inspiration to hair loss sufferers around the world, proving that losing one's hair should never prevent anyone from achieving all their goals.