It's supposed to be the happiest day of your life but planning a wedding can be a stressful experience, as Plymouth-based hairdresser Ellie Baker found out. Talking to ITV's Good Morning Britain, she told how just weeks before she was due to get married, her started to fall out in clumps due to alopecia.

Fear of being a bald bride 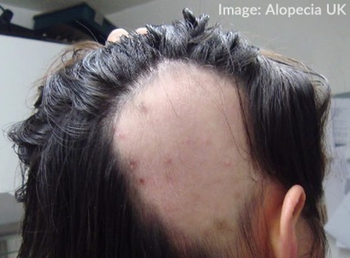 Often triggered by stress or shock, this type of alopecia affects the scalp only and causes the hair follicles to prematurely enter the resting phase of the hair growth cycle. This results in shedding and smooth, hairless patches that are often rounded or oval in shape. They can occur anywhere on the scalp and may appear in more than one location, sometimes joining up to form one larger area of hair loss.

The 35 year old had three distinct patches of hair loss, one by her hairline, another on the top of her scalp and a much bigger expanse at the back of her head. Whilst hair production may resume naturally, there is no way of knowing when - or indeed, if - this will happen.

During the interview GMB co-host, Ranvir Singh admitted, “I’ve had alopecia since I was about eight or nine, my dad died …I know what caused it and it never, ever got better.” Ellie explained how she turned to hair extensions as she didn't want to be bald for her big day. Story continues below.

Being a hairdresser, Ellie had learnt about the different types of alopecia during her training. As she had an 18 month old son, she first wondered if it may be post-partum alopecia - the hair loss condition that can affect women after having a baby - but the birth was too long ago for this to be a consideration.

What was confusing about her sudden hair loss was that, although she knew alopecia could be sparked by stress, Ellie says she felt excited, not stressed. Additionally, alopecia tends to be brought on by a sudden event that causes shock to the body rather than the more prolonged, lower-level stress involved in wedding preparations. Hair loss caused by on-going stress is generally more likely to present as thinning hair all over the scalp thanks to a temporary condition known as Telogen Effluvium.

The bride-to-be's alopecia could be related to something that happened up to three months before she started losing her hair. This is due to the timescales involved in the hair growth cycle; hair fall may only become obvious once the resting (Telogen) phase, has been in place for up to three months.

Coping with hair loss and helping others 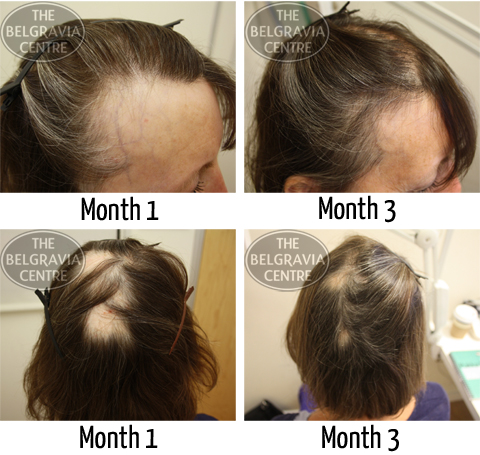 Clip-in wedding day hair extensions, and a specially coiffed hairdo devised by her friend Chelsea to hide her hair loss, helped to restore Ellie's confidence. However - as the pair noted during the interview - the extensions were just a temporary solution. Hair extensions, weaves and even some tight hairstyles - such as scraped back ponytails which some people use to cover up thinning or bald patches - can actually cause another hair loss condition: Traction Alopecia.

The best way to deal with alopecia, or any other forms of hair loss, is to speak to an expert. Although there is no cure just yet, there are a number of treatments for Alopecia Areata. Ellie first used what she describes as a 'steroid lotion', which did not work, followed by steroid injections in the back of her head, which she found too painful.

Another treatment available, and one that many Belgravia clients with alopecia areata, including journalist Alya Mooro,  have found can produce promising regrowth, is high strength minoxidil. This is applied directly to the scalp so it gets straight to work, stimulating the affected areas. You can find many images of clients before and after starting their treatment in our Success Stories.

Whilst a hair loss specialist can help to provide information and support, as well as on-going monitoring during your treatment, organisations like Alopecia UK, who helped Ellie understand her hair loss, also do a great job of promoting awareness and acceptance of the condition. Ellie and Chelsea have also now set up a business and a local support group to help other women with hair loss - not just alopecia.