10 year-old Bella Yabsley has become a celebrity in her home town of Gwennap, Cornwall after a determined campaign by local residents secured the funding she needed for a new wig. At the age of just four, Bella lost all of her hair to a condition called Alopecia Areata; six years later, her hair has still not regrown. 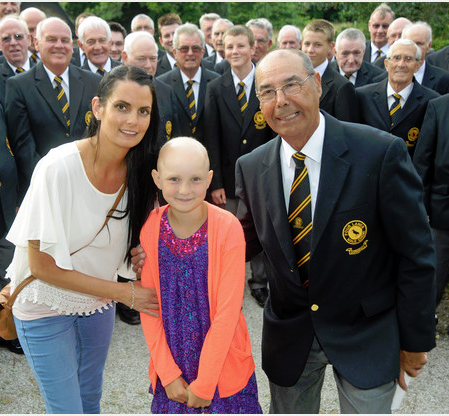 With the help of her local community, Bella and her family have managed to raise more than £3,300 towards the cost of buying a human hair wig. The young girl and her mother will now travel to Wales for a wig fitting consultation to ensure she gets the hairpiece she needs.

Bella mother, Beth, began an online fundraising campaign hoping to secure £2,500 funding for her daughter’s wig. However once another local resident, Trevor Law, became aware of Bella’s situation, donations began to pour in.

Mr. Law single-handedly raised several over £700 by touring local rallies and requesting donations, including the Stithians Truck show. He then went on to arrange a special concert by the Four Lanes Male Voice Choir, the proceeds of which were also paid into Bella’s wig fund.

Speaking about the success of Mr. Law’s efforts and the campaign in general, Beth Yabsley said;

“We aren’t just aiming to raise money for the wig but also for Bella’s self-esteem, she has now grown in confidence so much that she is brave enough to leave the house without a wig.”

Alopecia Areata is thought to be an autoimmune disorder that causes hair follicles in the scalp to enter the telogen (resting) phase of the growth cycle prematurely. This then results in patchy or total hair loss, as is the case for Bella. There are hair loss treatment options for Alopecia sufferers depending on the severity of their condition.

Whilst there is no cure for Alopecia Areata, a number of clients who have come to us with less severe forms of the condition than little Bella, have seen promising results from the use of minoxidil. This includes Ms P who features in one of our photographic Hair Loss Success Stories, and says, "I noticed a huge difference within 6 weeks of using the products.  Over the months I have felt re-assured and more confident about my hair growth.  My patches are almost gone (one completely) and the quality of my hair feels better."

The exact trigger for Alopecia is unknown, but it is believed that as many as one in every thousand people are affected by the condition at some point in their lifetime. Hair loss experts believe triggers for the condition could include long-term chronic stress, shock, physical trauma and certain bacterial and viral infections.

In Bella’s case, the cause of her Alopecia Areata is unknown. But thanks to the efforts of her local community Bella’s mother expects her to overcome her self-consciousness with a brand new wig.