American musical theatre actress Jackie Nguyen has been sharing her experiences of being diagnosed with Alopecia Areata on her blog.


Jackie, age 25, suddenly noticed hair falling out in clumps whilst brushing her hair: “I took a shower, did the normal routine of brushing and blow drying my hair, but then noticed that two handfuls of hair came out on my brush. The more I brushed, the more hair came out.” 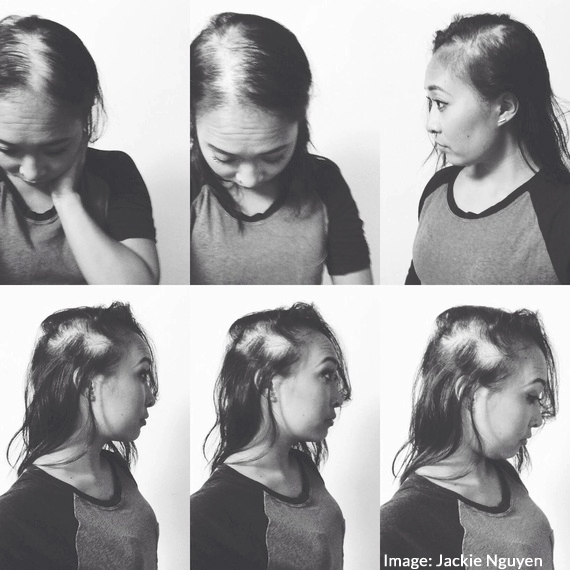 After several days of continual hair fall, Jackie visited a doctor, who completed tests to determine the cause of her patchy hair loss: “I had every type of blood test, eye test, lady part test, everything! I had to wait. Waiting for my test results was probably one of the most terrifying things I've had to do.”

After ruling out other causes of hair loss, Jackie was diagnosed with Alopecia Areata, a relatively common autoimmune disorder which affects one in every thousand people at some point in their life.

"I was speechless," Jackie told NBC, "I had never heard of Alopecia before. It was mysterious and scary."

A long battle with depression


The cause of Alopecia Areata is unknown but it often occurs after an external trigger such as a sudden shock or extreme stress. Jackie’s doctor told her that her hair loss may be related to her depression, following the death of her brother.

She explained, “I have had an on-going battle with severe depression since I was 19...For six years I have fought this demon over and over again.”

Now armed with a diagnosis, Jackie carried on with her life. But her hair continued to fall out: “My hair was falling out every hour - handfuls and handfuls of my hair ... Every shower I take, I lose more and more,” she wrote on her blog.

Noting that she had lost 75 percent of her hair in the first two weeks, the actress who has starred in productions such as Miss Saigon joked, "I am going to have to start wearing wigs. In fact, I already have one ready for when the rest of it falls. I might even grow the balls to bust a Jessie J".

Coping with being bald and hoping for a cure


The New York-based actress' inspirational posts about her baldness are infused with good humour and a 'glass half full' attitude despite the difficult circumstances. As she puts it, "Keeping positive is obviously on the list of my priorities. Concentrating on the good. Also, buying hats!". Now completely bald, Jackie's boyfriend has shaved his head in solidarity.

Since losing the last of her hair Jackie has been coming to terms with her new look: “I’ve been struggling mostly with feeling confident as a bald woman and not feeling insecure," she said. Signing off a recent blog, Jackie wrote, “I wish there was a cure for Alopecia.”


Although there isn’t a cure for Alopecia yet, there have been a number of successful clinical trials recently for treatments such as Ruxolitinib/Jakafi and Tofacitinib/Xeljanz. Whilst initial indications are promising, if the side-effects can be managed properly, these potential treatments for alopecia are still being trialled and we will bring you more on their findings as soon as the research results are released.

If caught early enough, depending on the severity of the condition and the stage it has reached, treatment for Alopecia Areata can be very successful. The condition has been seen to respond well to minoxidil-based treatments, with a number of Belgravia patients experiencing significant regrowth following comprehensive treatment courses.

If you start to notice excessive shedding, it is advisable to speak to a hair loss specialist as soon as possible who can advise you on your condition and talk you through options for treatment.

Ruxolitinib: The Pill That Could Cure Alopecia Areata

Ruxolitinib: The Pill That Could Cure Alopecia Areata

Depression and Hair Loss: The Facts

Depression and Hair Loss: The Facts