Gotham star Anthony Carrigan has once again proved himself to be a champion of living life to the full in spite of having hair loss.

The TV star talked about his condition Alopecia Areata in a video for the online channel The Great Big Story, a rather magical destination for anyone in search of positive, uplifting stories. The film follows on the heels of another video the actor made in which he opens up about the baldness which has played such a significant part in both his life and his career. 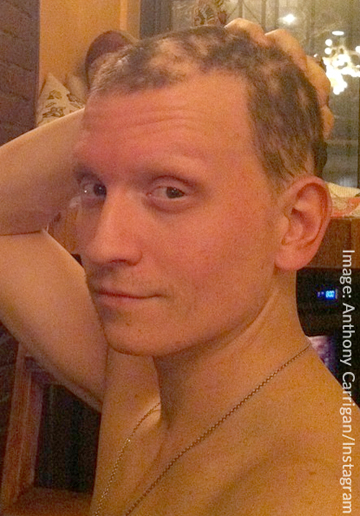 is not a hair loss condition as such; it is categorised as an autoimmune disorder which commonly leads to patchy hair loss of the scalp. This usually happens rapidly and without warning, and while it may clear up in a few months in some instances, in others it will linger, spread and possibly recur. There are also related conditions - often still referred to in discussion as 'Alopecia Areata' though their names are actually Alopecia Totalis, which causes total baldness of the head, often including loss of facial hair including eyelashes and eyebrows, and Alopecia Universalis, which leads to complete baldness from head to toe.

As Carrigan explains in his Great Big Story video which has already been viewed more than 500,000 times on Facebook Alopecia Areata happens when the body mistakenly believes it is being attacked, with the result that hair follicles prematurely enter the telogen (resting) phase, resulting in rapid hair fall.

Says Carrigan: “When I was 26 I started losing a lot of hair. It was terrifying, but I wouldn’t change a thing about how everything has unfolded.”

The actor goes on to explain that he was very shy as a child, and that when he first started acting he started to discover a “voice” within himself. “When I lost a lot hair, I had no idea what to do,” he says. “I didn’t know if I could remain in this business that was so image-focused. But then I found something within me that was worth fighting for.”

He says he found a whole new perspective on the way that he looked and what kind of characters he could play and he began to cultivate that. “I have been typecast as the villain,” he admits. “I think it isn’t just me; bald guys throughout history have played the villain.” Continues below

The comments accompanying the Facebook post suggest that Carrigan’s short video has been well-received by the many people with Alopecia Areata who have seen it. One, a 28-year-old woman named Ashley Newbert, writes: “I love my alopecia. I embrace my beauty but it’s so hard at times but my friends and family always say: ‘Ash, that’s you! We love you like that and wouldn’t know you otherwise.’ I’ve never worn a wig and I refuse to, my choice. I love it.”

can be very effective when the condition is not too severe; Carrigan’s smooth head and lack of eyebrows suggests that his hair loss is pronounced however he does actually shave his head to get the fully bald look. Some people with the condition which can affect up to two per cent of all people in their lifetime prefer the completely-bald look to the patchy appearance that is typical of this disorder.

Carrigan does seem genuinely accepting of his situation, and is undoubtedly a positive role model for others with Alopecia Areata. He says: “For the longest time I tried to create a certain ‘self’ that didn’t have Alopecia Areata, because a lot of time we feel like we need to put on a face. But that’s just not real. It’s all about being human and it being OK to not be perfect.”