Preventing baldness can seem like a lifelong pursuit for many men, given that genetic hair loss is extremely common. In the world of movies and television, however, the rare phenomenon of ‘voluntary baldness’ is something that can help an actor really get into the role.

While many male actors whose role demands that they appear to have advanced male pattern baldness on screen will choose the soft option a flesh-coloured skull-cap that hides their own hair  some go the extra mile. And the latest person to join this relatively small band of acting brothers is actor Alexander Skarsgård who went bald overnight for a role in a forthcoming movie. 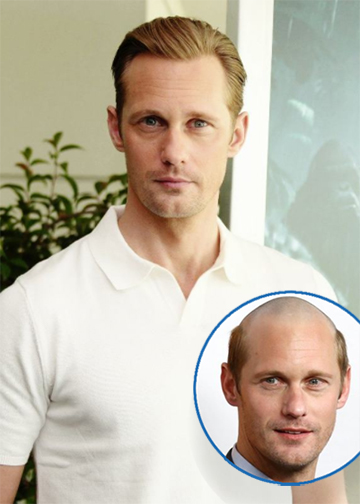 Alexander Skarsgard pictured before and, inset, after his latest haircut

The popular Swedish actor, who is best known for his leading role in the 2016 film The Legend Of Tarzan, was recently spotted at a Louis Vuitton exhibition in New York with a hairstyle that is normally so dreaded by men that they go to great lengths to change it. Shaving off the hair along his vertex - from his hairline to his crown - the True Blood star probably aged himself a good decade in the process, proving once again why male hair loss treatment is so popular among men when they start to lose their hair.

When a man begins to develop a receding hairline due to the hereditary hair loss condition male pattern baldness, he has several options besides shaving his head or letting nature take its course. At one end of the scale are hair replacement systems - wigs and toupees - and concealer powders (fibres which can give thinning hair a thicker appearance but which require quite dedicated, daily application), and at the other are hair transplants, which typically cost around £6,000 or more.

Specialist men's hair loss treatment sits somewhere between the two and is a convenient, non-invasive and clinically-proven way to stabilise hair fall and promote hair regrowth.

Men seeking to deal with male pattern baldness are typically offered one or both of the only clinically-proven treatments for this hereditary condition. The first is a drug named finasteride 1mg which is a DHT-blocker; the other is known as high strength minoxidil and comes in a number of different formulations, all of which are applied directly to the scalp where needed. These help to prevent hair loss and actively encourage new hair growth, with the first results generally becoming noticeable within three to six months of consistent use, depending on how advanced the balding was when treatment was started. Further support can come from a number of supplementary, carefully-developed hair growth supporting products, from laser therapy that can used at home, to highly-targeted hair supplements, such as Belgravia's exclusive Hair Vitalics for Men which contains a range of premium ingredients including biotin, zinc and selenium for the maintenance of normal healthy hair growth.

American website today.com reports that Skarsgård’s shiny-headed new look was for an upcoming financial drama named The Hummingbird Project, and it certainly caused some alarm amongst his fans.  While nobody seemed to like the new image, the actor was nevertheless applauded for his commitment to his craft.

Followers of the hit TV series Mad Men were similarly impressed by actor Vincent Kartheiser (the show’s Pete Campbell), who steadily shaved off his own hair during seven seasons of Mad Men to reflect his character’s deteriorating hairline.