Model and TV personality, Abbey Clancy has opened up about experiencing pregnancy hair loss and the effect it has had on her confidence.

The 32 year old told Closer magazine that her hair was falling out not only after giving birth to her third child, but also throughout her pregnancy. 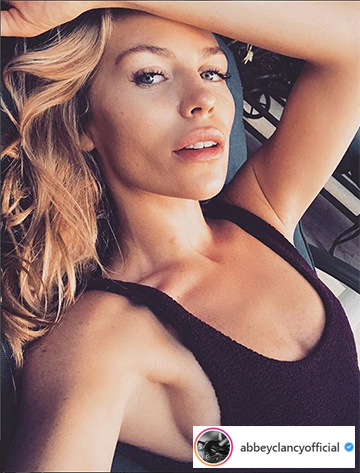 
"My hair was falling out throughout my whole pregnancy with baby Johnny - and still is now, so it's fallen out loads," Clancy told Closer. "Every day I'm like, 'My hair's thinner and thinner' - so that's hard and it does knock your confidence".

The hair colour brand spokesmodel added, "I didn't dye my hair during pregnancy and it went quite dark but, as soon as I had the baby, I wanted to go blonder and feel more like me and get back my confidence."

At any one time around 90 per cent of scalp hair is actively growing (the Anagen stage), whilst 10 per cent is in the 'resting' (Telogen) stage of the hair growth cycle; this is the penultimate stage before hair sheds ready for the cycle to repeat. Generally during pregnancy the Anagen phase is extended, meaning that the hair grows for longer and sheds less than normal. Once the baby has been born and hormone levels return to normal, the Telogen phase kicks in and the hair begins to fall; this is the entirely normal process known as post partum alopecia.

Whilst post-partum alopecia is a well-documented phenomenon experienced by many women around three months after having given birth, it is less common for hairloss to occur whilst a woman in pregnant. However, due to hormonal fluctuations, it is entirely possible for a couple of different hair loss conditions to occur.

The first, and the one it seems may have affected Abbey Clancy, is a form of temporary hair loss known as Telogen Effluvium. This presents as thinning hair all over the scalp and tends to last no more than six months, though if it does it may be chronic, though this is still a temporary issue. This can also occur if there are any underlying health issues set of or exacerbated during pregnancy, such as additional thyroid issues, for example. 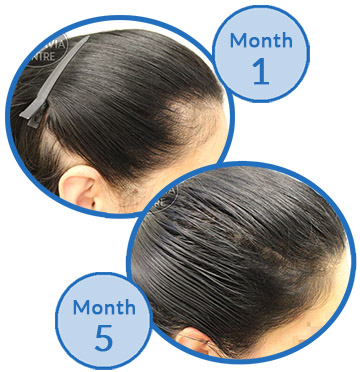 
The second is Alopecia Areata, an autoimmune disorder which can be triggered by hormonal changes and presents as patchy hair loss forming bald spots on the scalp. This is rarer and does not match the description of thinning hair given in Clancy's interview.


The former Strictly Come Dancing star is one of a long list of new mums, from Britt Ekland to Cheryl Tweedy, to speak out about thinning hair following pregnancy.

Hair loss treatment cannot be used during pregnancy, however, once a woman has given birth and finishing breastfeeding or expressing milk, this option opens up to her. Usually the hair returns to normal naturally within 12 months of postnatal alopecia developing, though treatment can be used to help expedite this process. This approach often involves the application of a topical medication bolstered by the use of appropriate, key hair growth supporting products.

One thing Belgravia hair specialists would caution against is wearing hair extensions in order to make the hair appear fuller - something Abbey Clancy, like many celebrities, has been known to do. Whilst wearing extensions - whether bonded, sew-ins, clip-ins or tape-ins - can provide the hair with extra volume, the additional weight and tension they cause can damage hair follicles. This can lead to hair breakage - where the hair becomes so weak that it snaps along the shaft, leaving it looking frizzy and thin - and/or hair loss from Traction Alopecia.

Anyone concerned about excessive hair fall, whether they are pregnant, have recently had a baby or not, should consult a professional at the earliest opportunity. This will not only provide them with the peace of mind that can come from having an expert diagnose their condition, but  it can also arm them with the necessary knowledge regarding treatment options that's needed to make an informed decision about how to proceed.