In this article: Alopecia | Hair Loss

A team of researchers in America have taken scientific discoveries made in the fight against inflammation and applied them to the autoimmune disorder Alopecia Areata in the hope of finding new treatment options for the condition, which causes patchy hair loss.

The team at Columbia University in New York asserts that by using drugs that have shown success in fighting inflammation in another autoimmune disorder rheumatoid arthritis they have a strong chance of tackling Alopecia Areata, too.

Autoimmune conditions have long been thought to be linked as those who are affected often present with more than one disorder of this type. This information has been used to impressive effect by the Columbia research team who have had successful initial trials, which are still ongoing, into treating severe alopecia areata with drugs currently approved as rheumatoid arthritis medication.

The University team is currently in the throes of a clinical trial into the use of rheumatoid arthritis drug Abatacept, which goes by the brand name Orencia, and looks set to complete its study this summer. A total of 15 test subjects are thought to have been involved: all have moderate to severe Alopecia Areata, with the trial also opened up quite recently to volunteers with the rarer and more extreme forms of the condition, Alopecia Totalis and Alopecia Universalis.

“Abatacept (made by Bristol-Myers Squibb) is a safe intervention known to effectively treat rheumatoid arthritis, another autoimmune disease, by fighting inflammation,” writes the University team in its trial announcement at clinicaltrials.gov. “There are some genetic and chemical similarities between those with active rheumatoid arthritis and Alopecia Areata, suggesting that treatment with the same drug is likely to be effective. In mice specially designed for testing drugs for the treatment of human alopecia, this medication worked to prevent the disease Alopecia Areata from starting.” 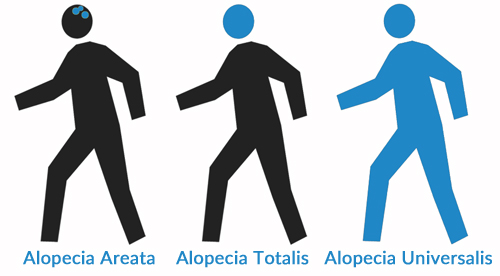 Areas of the Head and Body Affected By Alopecia Areata, Alopecia Totalis and Alopecia Universalis

The test will involve treating patients with the drug for six months, with its effectiveness being measured in several different ways, including the SALT score (Severity Of Alopecia Tool). Patients are to be assessed for an additional six months after completion to ascertain whether there are any long-term side-effects.

The team also states that small scalp biopsies and peripheral blood will be taken at the beginning of the study prior to treatment and then after 4, 12 and 24 weeks. “The chemical analysis of these skin samples and blood will help us to understand how the disease happens, how the treatment works, and perhaps even guide us to better treatments in the future,” it states. 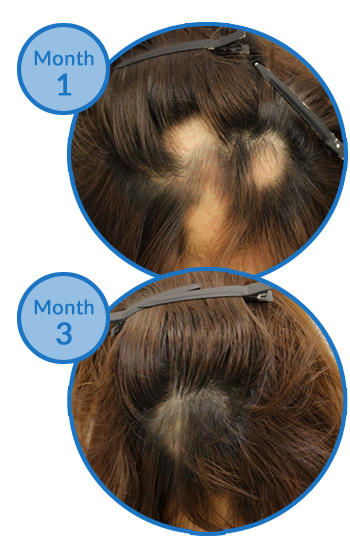 While there are currently Alopecia Areata treatments that can often help people with the mild to moderate version of the condition to regrow their hair, it is true that the disorder remains something of an enigma in that very little is known about the actual cause of the condition. Although sudden shock or trauma and a potential genetic connection are all believed to play a part, the mechanics of its onset remain unconfirmed.

What can be especially troubling is the way in which it begins suddenly with hair falling out in 'clumps' without warning, rather than shedding slowly over time. Adding to the confusion is the fact that hair can grow back in a matter of months, only for it to fall out again at a later date. It can stay confined to one or two spots or it could spread to the whole head.

In addition to  providing effective, bespoke treatment courses, a reputable hair loss clinic can also provide the support and guidance that many people need when experiencing such a quick-impact condition.

Belgravia client “Miss S” - pictured - recently emailed to say that: “From my first appointment, the staff were professional, friendly and put me at ease they made me feel normal. It was the first time since my diagnosis that I was able to talk to someone about my hair loss without crying. In no time, my hair started growing back, and with it, my confidence.”

Three months into treatment, almost all of her hair has grown back.

In this article: Alopecia | Hair Loss