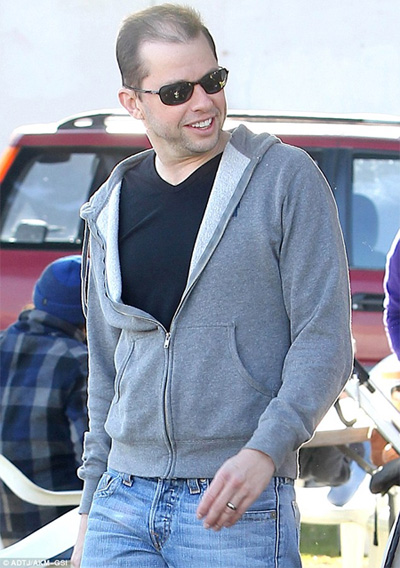 Men and women experiencing hair loss often look for ways to reduce the appearance of bald patches or a receding hairline. An entire industry has sprung up to accommodate such people, selling all manner of “solutions” designed to trick the eye and hide thinning hair.

Similar to the solution used by Two And A Half Men star Jon Cryer, masking lotion is designed to tint the scalp so that it matches the user’s own hair colour. The lotion also helps thicken hair follicles to further boost the impression of a fuller head of hair. Each hair is coated with organic proteins, making each look up to 50% thicker.

Because masking lotion adheres to existing hair to give the impression of volume, it is unsuitable for use by people who are totally bald, or have extremely large bald patches. There have also been claims from some users that masking lotions wash off in the rain. Some also report issues with the lotion rubbing off on pillows, cushions and soft furnishings.

This particular solution is based around electro-statically charged microfibers that “stick” to the user’s hair. From a distance the microfibers look like short strands of hair, giving the impression of a thick, lustrous head of hair.

The electrostatic charge is extremely strong, so that the microfibers are not easily dislodged. Static electricity is impervious to rain so users of thickening fibres are unlikely to see their “hair” disappearing in a downpour. The only way to remove the fibres is by shampooing.

Applying thickening fibres can be time consuming and delicate. Users report that putting too much of the fibres on looks “fake”. As with masking lotion, thickening fibres rely on the user having a good amount of hair to which they can adhere. Fibres are unsuitable for people with larger bald spots or who have experienced significant hair loss.

Hairpieces have been around in various forms for centuries, but modern toupees are more realistic than their predecessors. Often referred to as ‘hair replacement systems’, toupees use human hair attached to a plastic membrane that is glued to the wearer’s scalp to give the impression of a full head of healthy hair. Wearing one of these toupees is simple and easy, staying in place for weeks or months at a time and is supposed to be suitable for men and women regardless of the extent of their hair loss.

There are some drawbacks to toupees, however. Perhaps most importantly, wearers will need to shave off their existing hair to ensure a good fit for the toupee. The toupee will also need to be refitted periodically throughout the year as hair regrows underneath, pushing the membrane away from the scalp. There have also been reports of some wearers experiencing allergic reactions to the glue used to affix the toupee to the scalp.