As a mark of support for loved ones who are about to lose their hair during cancer treatment, it has become reassuringly commonplace for friends and family members to shave off their hair and temporarily embrace the “bald” look. Sometimes multiple members of the family take part but an event in India this month went the extra mile with an incredible 150 participants.

The initiative, which was called Bald And Beautiful, took part in a mall in Bangalore, where local newspaper the Bangalore Mirror reported that people from all walks of life signed up for a session with the clippers to show their support for cancer patients with hair loss. 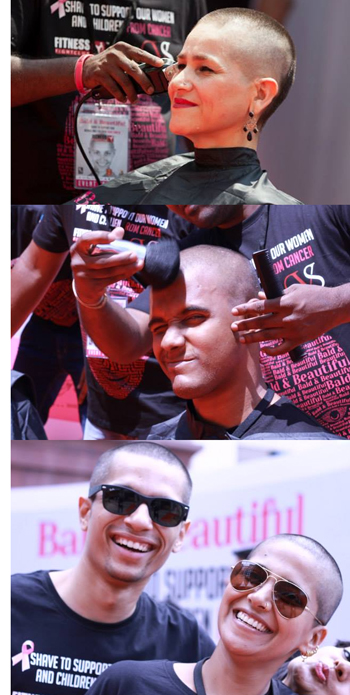 Medha Khanna, a 16-year-old girl who volunteered to shave her hair off, told the Bangalore Mirror: “It was a very easy decision and I did not think too much about how I would look. The only thing that was running in my mind was that the hair will grow back in another six months, but the cancer patients undergoing therapy would be suffering both emotionally and physically.”

The mass shave, she says, was a way to reach out to them and tell them “that we are all there for them.”

Hair loss during chemotherapy and radiation therapy is common, and many people with cancer remark on what a difficult part of their journey it is because it makes their cancer far more public than they would often like it to be. By increasing the number of bald heads in Bangalore, the 150 who signed up for the head shave hoped to make life just a little bit easier for those whose lack of hair did not come about by choice.

The gesture was particularly aimed at female cancer patients: in India, long hair is much prized amongst women, and the event helped to raise money for a foundation which will use it to hire make-up artists and image consultants to work with women who have cancer.

“We want to remove the taboo that is attached to being bald in Indian society through this initiative,” says Austin Prakesh, one of the organisers.

Pictures of the event show what a successful, positive experience it was, with participants happy to do their bit.

A similar UK event featuring 50 volunteers - which is set to be the largest charity head shave ever in Wales - is due to take place next month in Cardiff. You can volunteer to take part or donate to their fundraising efforts, with all proceeds going to Cancer Research Wales, via their Virgin Money Giving page.

With chemotherapy, hair loss usually begins between one and three weeks after treatment starts and happens when drugs that are used to attack the cancer cells inadvertently kill healthy cells (such as those in the scalp) as well. Patients who undergo radiation therapy often see even more sudden hair loss, brought on by high-energy radiation rays that are used in the treatment.

In the UK there are a number of cancer charities and organisations that offer support and advice to people who lose their hair though treatment.

Breastcancercare.org.uk, for example, have a number of telephone support staff who have experienced hair loss of their own and can talk to patients; they also offer a service called HeadStrong, where trained volunteers explain how to make the most of scarves, hats and other headwear during a private, hour-long appointment. Additionally, free wigs are available on the NHS to anyone 19 or under who is in full-time education.

For children, cancer treatment is especially distressing, and hair loss a notably troubling part of the journey. In recognition of this, a much-respected charity named the Little Princess Trust was launched in 2006. Since then it has provided beautiful, real hair wigs to thousands of girls and boys thanks to donations of both money and hair.